Dubai Airport has an interesting social media promotion with great prizes during this busy travel season for passengers who check in at least 2 hours prior to their flight and upload a picture of it.

Purpose of this campaign is to promote passengers to arrive early for their flights and prizes include activities in Dubai such as Michelin Star Dining Experiences and a staycation at Atlantis The Palm.

We at LoyaltyLobby are following DubaiAirports on Twitter and today they retweeted an article at Time Out Dubai (see here) that had some more details about the promo.

When you’re having to deal with the safe and organised transit of nearly a million people over the course of a long weekend, the last thing you want is for them to arrive all at once…and late.

Truth is a lot of us find it next to impossible to leave enough time for panic-free travel and just leave it all to the last minute. Maybe we just need some encouragement (as if the prospect of missing our flights wasn’t enough already!).

And so it is that Dubai Airports have come up with the ingenious idea of egging on travellers with a stack of free entertainment and prizes for early birds.

Some of the freebies up for grabs by checking in early are a family day out at Aquaventure, a meal at a top restaurant and a weekend stay at five-star hotel Atlantis The Palm.

To be in with a chance of winning, make sure you check in two hours before your flight takes off, take a photo of your boarding pass and post it on social media with the words “check-in champion” and under the hashtag #HangoutDXB. 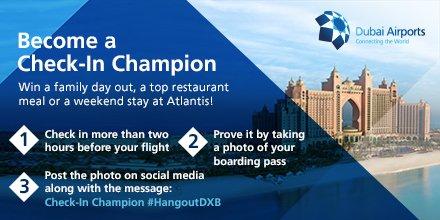 Dubai DXB Airport is just huge and can be an attraction for itself. It more like a giant Mall that happens to have flights departing from it, not an airport that happens to have a few shops so it doesn’t hurt to arrive early and get through the check-in and screening process on time.

It’s a nice combination of the DXB marketing department to not only have a giveaway of different prizes for shoppers and passengers but to tie it to the condition of checking in early. In the end people who check in early spend more time (and money) in the outlets which brings in more revenue. Or you just visit the nice lounges should you happen to fly Emirates.