The flight crew of a Delta Airlines flight en route to Rapid City, SD afforded themselves a major screw up when they mistakenly landed at a nearby Air Force Base instead. 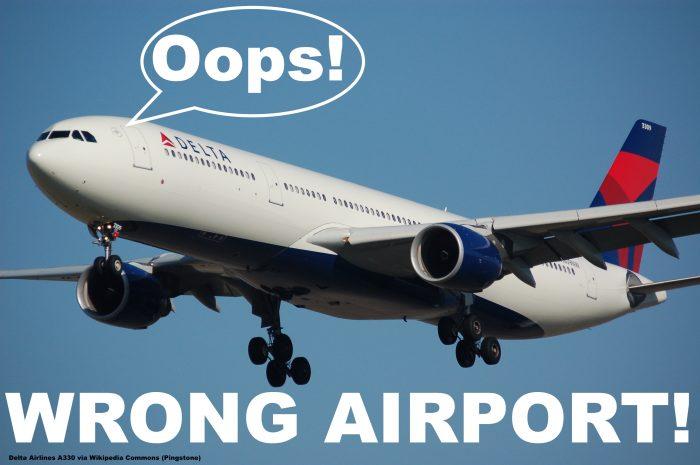 The Airbus A320, flight DL2845 from Minneapolis/St. Paul touched down at Ellsworth Air Force Base, home of the 28th Bomb Wing about 5 miles north of Rapid City where is was supposed to land.

Realizing their snafu the pilots must have felt sick to their stomach considering the embarrassment and likely consequences this will have for them.

More than 100 Delta passengers on board a flight bound for Rapid City, South Dakota got an unexpected surprise Thursday night when their plane mistakenly landed at an Air Force Base, about five miles north of the aircraft’s intended target.

Ellsworth Air Force Base confirmed in a statement to ABC that while it was an unauthorized landing, “Base officials followed the proper procedures to address the situation and ensure the safety of our Airmen, their families and the passengers.”

Both the Federal Aviation Administration and the National Transportation Safety Board are investigating the incident.

“The pilots of the Airbus A320 had been cleared to land at Rapid City Regional Airport. The aircraft instead touched down at Ellsworth Air Force Base, shortly before 7:45 p.m. local time,” the FAA released in a statement to ABC News. …

The flight crew of the Airbus A320 has since been taken off-duty, according to Delta.

“Delta will fully cooperate with that investigation and has already begun an internal review of its own. Safety is always Delta’s top priority,” the airline said in a statement.

The flight, which took off from Minneapolis/St. Paul, did eventually leave for Rapid City after coordinating with officials, Delta added in the statement. Expected to land at 8:50 p.m. local time, Delta flight 2845 eventually landed nearly three hours later at 11:31 p.m. local time.

3 hours late arrival for a 5 miles off course landing. Yikes! These passengers must have been pissed off big time. Other reports said that Delta has reached out to them and offered compensation. Let’s hope it was substantial.

The flight crew will likely face disciplinary action over this mishap which really doesn’t shine a good light on Delta. Though landings at incorrect airports are not totally uncommon. In April an Aeromexico flight to Monterrey landed at a wrong airport (see here) and back in 2014 a Southwest crew also strayed off course when it touched down at an incorrect airport in Missouri (see here) where the plane stopped just 500 ft before the end of a much shorter runway (half the length) of it’s original destination. The co-pilot of said Southwest flight retired 3 months later but the Captain was back in the cockpit by then.

Airfare of the Day [Business Class] DELTA/KLM Amsterdam to Los Angeles from 1,184 €

Airfare of the Day [Business Class] DELTA/KLM Helsinki to New York from 1,210 €

Is Thai Airways Going To File For Bankruptcy Even After A...

Some interesting new developments appeared in the media about Thai Airways today as the countries Prime Minister denied rumors that the carrier would file...

Virgin Australia Velocity Redemptions Are Back Online For Domestic Routes –...