Qatar Airways is on a buying spree and made an announcement today at the Farnborough Air Show in the UK that it would acquire a 10% stake in Latam Airlines, which was created with the merger of Lan (Chile) and TAM (Brazil). 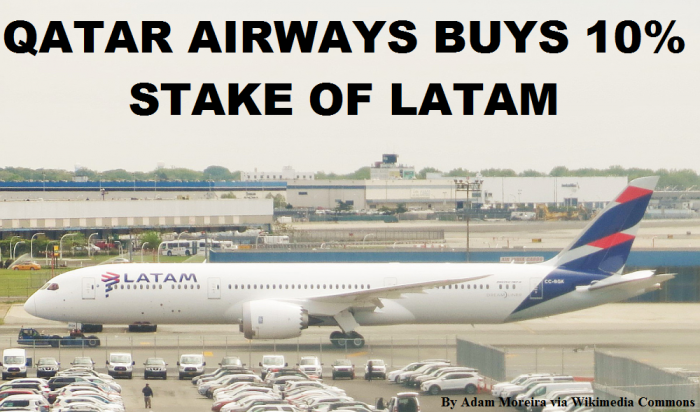 Qatar Airways already owns a 15% stake in IAG that is the parent of British Airways, Iberia and Vueling.

Here’s an excerpt from WSJ (access the piece here):

Qatar Airways Tuesday said it plans to take a stake of up to 10% in LATAM Airlines Group as it continues to expand its investment in other carriers.

Under the terms of the deal LATAM would also hold a fresh fundraising round, to which Qatar Airways would subscribe.

State-owned Qatar is advancing its efforts to build a network of international partners, even though its influence is typically limited by laws restricting foreign shareholdings. In addition to its stake in IAG and the deal with Latam, it’s also interested in Royal Air Maroc, which would provide access to North African markets, as well as Italy’s Meridiana SpA.

With the Latam agreement, Qatar Airways aims to profit from the Chilean airline’s revenue- and cost-sharing pact with British Airways owner IAG. Shareholdings in the carriers also cement ties on both sides of the Atlantic as the Gulf operator seeks to funnel more passengers through its Doha hub and offset lower demand in the Middle East from low oil prices.

Abu Dhabi-based Etihad Airways has its own equity alliance that includes airlines such as Airberlin, Alitalia, Jet Airways, Air Serbia and Air Seychelles. It appears that Qatar Airways is trying to form something similar around its Oneworld partners (LATAM, British Airways & Iberia). Emirates has steered away from buying stakes in airlines.

Air France-KLM and Delta has invested in GOL (a Brazilian discount airline) and United bought stake in Azul (another Brazilian airline started by founder of JetBlue).

The market in South America is soft right now due to the commodities bust and airlines are seeking capital injections. It is interesting to see how these airlines will perform in the future and if the investments made ended up being sound.

Airfare of the Day [QSuites] QATAR AIRWAYS Stockholm to Bangkok from 1,379€