The Turkish Military has announced that a coup is underway and that they have effectively overthrown the Government of controversial President Erdogan with a Peace Council being installed for now. 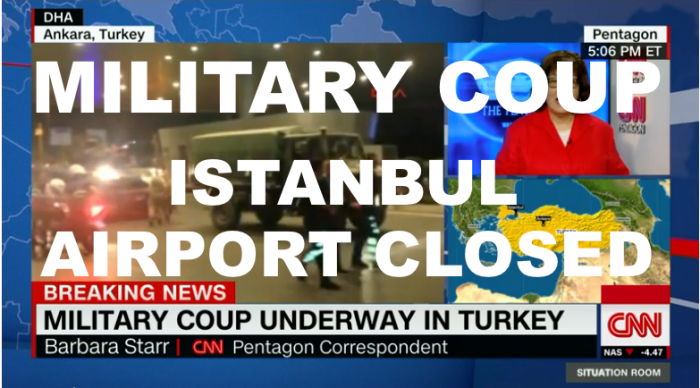 Martial law and as well as curfew has been declared and all flights from Istanbul International Airport have been suspended though latest reports say the coup has fail and the government taken control again.

CNN reports live on the situation in Turkey (access here).

The Turkish military has taken over the government and imposed martial law, according to an announcement read by an anchor on state broadcaster TRT. The statement was made on behalf of the “Peace in the Nation” council, the announcer said.

“The political administration that has lost all legitimacy has been forced to withdraw,” the anchor said.
Earlier, Prime Minister Binali Yildirim told broadcaster A Haber that some military units have attempted a coup. Yildirim vowed the coup attempt would not succeed. He told state news agency Anadolu the coup is “an attempt against democracy and the will of the people. Those who attempted this will pay the heaviest price.”

There have been no independent verification of the claims by the military or the government. It is unclear who is in charge in Turkey. The military has issued statements, which have been published in some Turkish media, and not others, and reported by the Reuters news agency, claiming it has “fully seized control of Turkey” to maintain democratic order, that rule of law must remain a priority and international relations must remain. The statements have not been distributed through regular web channels.

News about the airport situation have been sparse, however Twitter provides interesting and informative results:

CNN also has a Live Blog (see here) where latest reports say the coup is over with the government having regained control.

After a night of explosions, gunfire and tanks rolling along the streets, President Recep Tayyip Erdogan told Turkey Saturday that an attempted military coup was over and the government was in charge.

However, the sounds of fighting were still being reported in Ankara and Istanbul after the chaotic attempt by members of the military to wrest control from Erdogan.

At least 60 people died and 1,000 people were injured across the country.

If you or any friends have travel scheduled through Istanbul, for example on Turkish Airlines you can expect cancellations or in the very least long delays. Inside Turkey it would be the best to avoid leaving the accommodation for the meanwhile as the U.S. State Department advises travelers to seek shelter.

Let’s hope the power battle and transition of government in Turkey should there be any (doesn’t look likely at this point) won’t cause too much bloodshed and that people will be safe.

Travelers who are effected by cancellations and delays covered with a comprehensive travel insurance should contact their insurance provider for immediate help (alternative flights, hotels etc) if needed.