Thai Air AsiaX, one of the many subsidiaries of the Air Asia Group, just launched another long haul route out of Bangkok, this time to Tehran and Muscat. 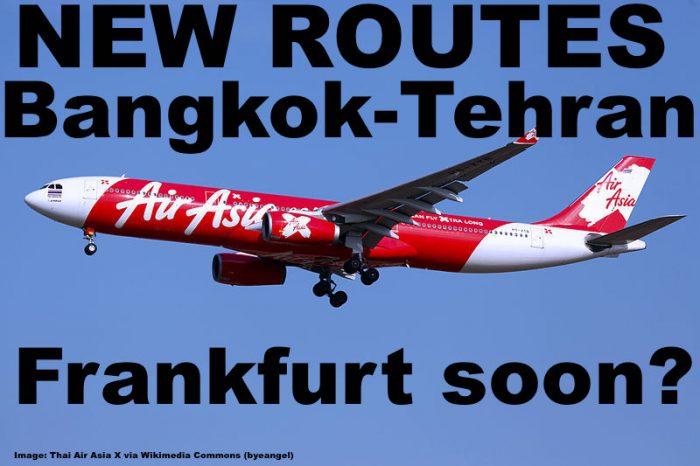 On top of that Air Asia boss Tony Fernandes recently announced that he is planning for flights from Bangkok to Frankfurt/Germany undercutting the competition of Thai and Lufthansa.

Air Asia has settled into almost all emerging as well as established markets in Asia and grew rapidly, first with short regional flights but then the brand expanded with Air Asia X operating longer routes using Airbus A330 equipment.

In Bangkok Air Asia flies out of Don Mueang Airport (DMK) which is the second city airport that used to be Bangkok’s main airport before the big Suvarnabhumi Airport (BKK) was built.

The Nation (access here) reported about the inaugural flight to Tehran and Muscat.

The three flights weekly from/to Bangkok and Tehran will be avaible on Monday, Wednesday and Friday from June 22 onward.

Three Bangkok-Muscat flights, on the other hand, will be operated on Tuesday, Thursday and Saturday from June 28 onward.

Both routes are being introduced at a special promotional fare starting at only Bt2,990 for economy class seats and Bt9,990 for Premium Flat Bed business class seats.

Tehran became the airline’s sixth destination after Osaka, Seoul, Shanghai and Tokyo with Muscat in Oman becoming the seventh in late June.

Air Asia Founder and CEO Tony Fernandes also announced his plans that Thai Air AsiaX would be starting flights to Frankfurt within the next year. It’s unclear how these plans would be effected but the ICAO downgrade of Thailand’s entire aviation sector. LoyaltyLobby wrote about this in late 2015 (see here).

The only alternative for direct flights to Tehran is Mahan Air ex BKK and even though they operate flights much safer than the national airline Iran Air I decided to use one of the ME3 carriers when I visited Iran 2 years ago. I would feel much more confident flying Air Asia direct even though I’m not a big fan of the old Don Mueang airport.

The other issue of Thailand’s aviation safety downgrade is something that negatively effects all Thai airlines which want to file for new routes into countries that require ICAO standards to be maintained. This obviously doesn’t apply to Iran but might prove to become a problem for the Frankfurt plans.