The U.S. Federal Aviation Administration (FAA), in reaction to the attempted Coup d’Etat in Turkey yesterday, has prohibited all airlines regardless of registration to operate flights ex Turkey to the U.S. 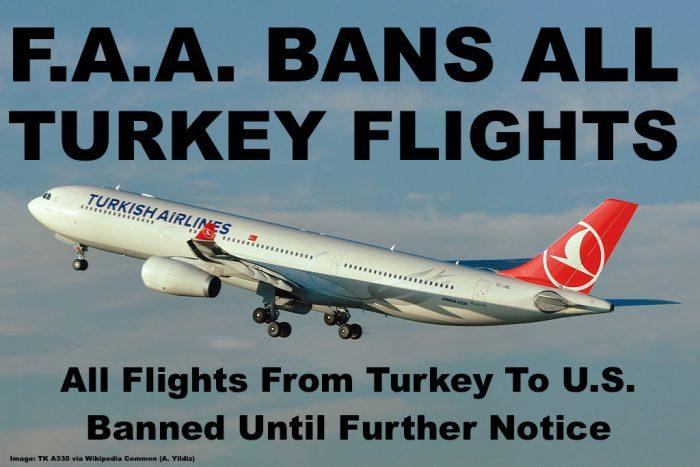 This ban is valid for all airliners regardless of registration and also includes flights that would fly via a third country and effectively halts all Turkish Airlines flights to their nine U.S. destinations until further notice.

The U.S. Embassy in Ankara has issued a new security message (see here) which is as follows:

U.S. Embassy Ankara informs U.S. citizens that routes to Istanbul’s Ataturk airport are open; however, we are still hearing reports of sporadic gunfire. Security at Ataturk airport is significantly diminished and U.S. government employees have been instructed not to attempt to travel to and from Ataturk airport.

This is a huge blow to Turkish Airlines and all the passengers who are now stranded and require routing changes onto different airlines in order to reach their destination.

Turkish Airlines has published the following notice on their website in regards to Ticket changes for flights that were scheduled on the 15th, 16th and 17th of July.

There is no reaction to the announcement of the flight restrictions to the United States and on top of that at the moment Turkish Airlines continues to sell tickets to the U.S. as well.

This will result in a lot of headache and expenses for Turkish Airlines if they don’t take measures to stop the sale and issuance of tickets as soon as possible because all these passengers will require a re-booking. I imagine it will be pretty chaotic to deal with the TK ticketing desks in the coming weeks so my advise is to stay clear of Turkish Airlines tickets for the time being.

Award ticket holders might be in a dilemma here. You can either contact your airline that issued the ticket and ask them about your re-booking options or you can let it ride and wait what TK does for you when your departure comes closer. The ideal case is always to be re-booked onto another airline into a revenue booking class while being on an award ticket to earn additional miles but given the risks involved in this instance I’d probably try to resolve it as clean as possible.

Without doubt the FAA’s decision was based on the breach of secure facilities at Istanbul Airport in the last 36 hours as many security posts have been abandoned and unauthorized individuals had access to sterile zones at the airport. Until the airport is screened and vetted to be clear again I can’t see the flight ban being lifted in the near future (as in days or at least a few weeks).

As I wrote yesterday I recommend to get in touch with your airline, tour operator or travel insurance should you be effected by the circumstances in Turkey and the new limitations in air travel from that area.