As a readers of LoyaltyLobby should know by now, I tend to follow the business and global news closely. 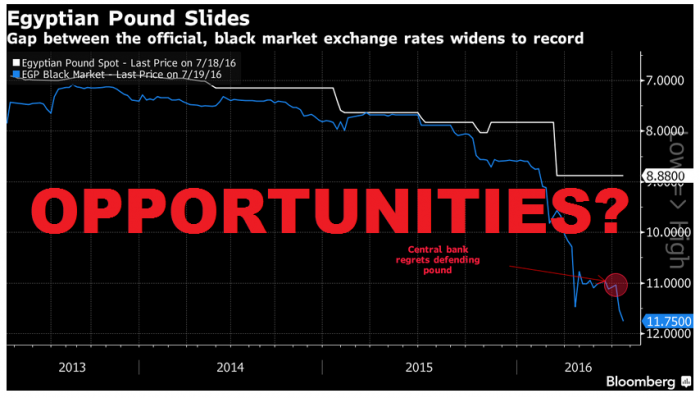 When I was watching the Bloomberg News yesterday, they had a piece about the widening difference between the official and black market rates of Egyptian Pounds. This can make vacationing in country and buying airline tickets originating in Egypt cheaper as long as you are willing to bring some hard currency and deal with the “black market”.

You can find the Bloomberg piece here of which below is an excerpt:

The Egyptian pound extended losses in black market trading on speculation that policy makers will weaken the official exchange rate to end the country’s shortage of foreign currency.

The pound slumped to 11.75 a dollar, according to the average quote of four money changers in Cairo surveyed by Bloomberg on Tuesday. That compares with 11.54 a week earlier and represents a 32 percent premium to buy dollars over the official exchange rate, the widest gap since Bloomberg started tracking the data in 2013.

A 13 percent devaluation of the pound’s official exchange rate in March, the biggest in more than a decade, has so far failed to attract back foreign investors to the government debt market where they held $10 billion worth of T-bills at the end of 2010.

You can basically save 23% off of the price if you decide to exchange the cash on the black market rather than paying by credit card.

I have been eyeing issuing Oneworld around the world ticket in business class and new devaluation or exchanging notes on the black market would make the price starting it in Cairo quite attractive.

When there are drastic foreign exchange moves airlines tend to be bit behind with their updated prices. This creates opportunities worth taking advantage of.