One passenger on a Cathay Pacific flight from Hong Kong to Bangkok tried to open an overhead compartment in the cabin which however wasn’t existent, instead he ripped off the entire ceiling panel causing substantial damage to the brand new A350 aircraft. 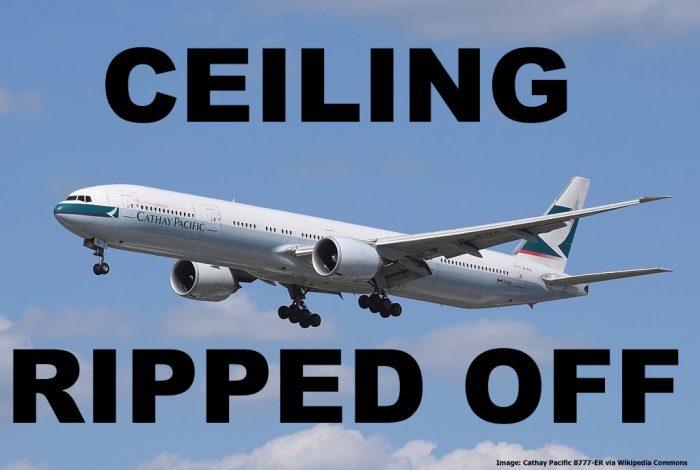 Repair works lead to the flight being delayed by 3 hours and passengers not being amused over this honest mistake which might partly have been caused by a missing warning label.

Cathay Pacific took delivery of the new Airbus A350 aircraft just the previous week which will will reduce the average fleet age at a time when the airline is phasing out their majestic Boeing 747 of which the last will fly in September.

A hapless traveller delayed fellow passengers by three hours after he mistakenly tore off a section of ceiling on a brand new Cathay Pacific aircraft on Wednesday.

The 280 passengers on the flight to Bangkok by an Airbus A350 on Wednesday morning were forced to wait while engineers carried out repairs to the aircraft before it was cleared for take-off.

The unnamed traveller, seated towards the rear of the plane, had attempted to open an overhead luggage bin, but instead managed to pull off a piece of ceiling panel, exposing a redundant space above and causing serious damage to the plane.

You can see here how the final result looked like: 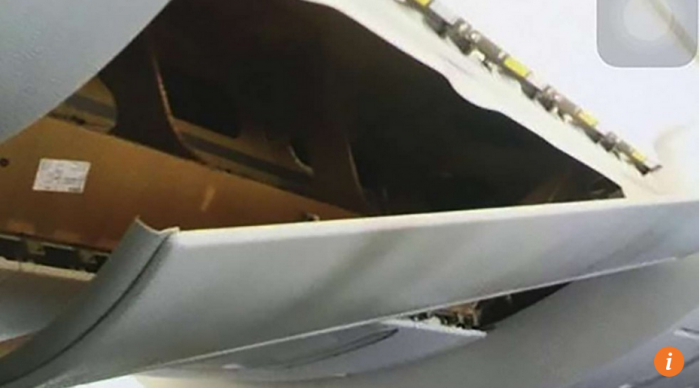 You can imagine the shock of the passenger himself when all of a sudden this huge panel came rushing down. He must have almost gotten a heart attack!

Engineers managed to repair the piece, but flight CX705 took off three hours late. It is believed the passenger was allowed to continue on the flight without sanction.

Most airlines use signs on their aircraft to inform passengers not to open the non-existent overhead bins, but this aircraft did not.

The airline said the incident was a blip, and praised the introduction of its latest aircraft. It took delivery of the second of 48 next-generation aircraft last week. They will cost HK$124 billion in total.

Certainly a huge inconvenience for all the passengers and an embarrassment for the guy who pulled this thing off. I mean fine, the sticker was missing but how long do you continue to rip on something if you feel it doesn’t give way?

The offending passenger was still allowed to travel and likely won’t be held liable for this damage but it should serve as a reminder for Cathay Pacific to attach/order proper labeling for all static parts.

Also let’s not forget that Cathay has a huge customer base in China, many of which are not experienced travelers or haven’t been on an airplane before at all.

Airfare of the Day [Business Class] CATHAY PACIFIC Tokyo to Bali from $1,356