Air Canada passengers who were waiting to fly back home from Manchester, UK to Toronto found themselves stranded for two days after their aircraft developed a technical malfunction and the flight crew exceeding duty time limits on the second attempt to fly. 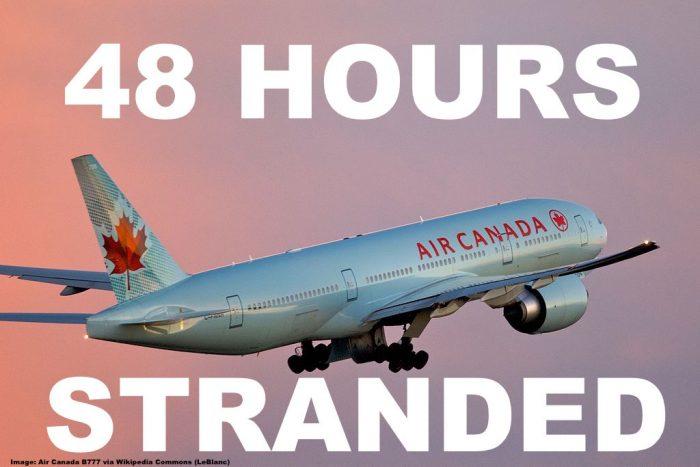 The passengers first boarded after a two-hour delay, then sat on the tarmac for the next five hours after which the flight was cancelled.

On the second day a new attempt was started which was again plagued by technical issues and eventually the crew exceeding their duty time limits.

CBC (access here) reported about the situation and responses of passengers stuck in the UK.

Air Canada passengers that were stranded in Manchester, England, for two days have finally arrived in Toronto on Sunday afternoon.

The airline says it will be in touch with the affected customers for a full refund after travellers were delayed for 48 hours.The flight to Toronto was scheduled to leave Friday, but Air Canada had said as many as 197 passengers would have to wait until Sunday before taking off.

In an email to The Canadian Press, Air Canada spokeswoman Isabelle Arthur says the airline apologizes for the extended delay and “we are sorry we’ve let our customers down.” …

Manchester residents Melanie Best and her husband had booked the flight with plans to attend a wedding celebration in Toronto. In an email to The Canadian Press late Saturday night, a frustrated Best described their long and trying ordeal.

She said they boarded the plane Friday after a two-hour delay, then sat on the tarmac for the next five hours while mechanics tried unsuccessfully to fix a hydraulic pump.

After the flight was finally cancelled, the passengers were put up in a hotel and instructed to return to the airport the following day.

Bad luck would have it that the following day their situation wouldn’t improve, rather the opposite as another defect delayed them further.

However, after checking in again Saturday morning, Best said repeated delays kept her and the other passengers stuck in the airport lounge until the early evening.

“Come 6 p.m., passengers were getting really stressed and angry and all gathering by customer information demanding more information,” she said.

“At this point, people were crying and disgusted beyond belief,” she said.

This was indeed a combination of the worst circumstances but having passengers wait for five hours on the tarmac while repairs are taking place is unreasonable. After two hours it should be pretty clear there is a bigger problem and I think as a passenger I’d demand to be let off the plane. I’m surprised passengers were not accommodated on other carriers since Manchester isn’t that isolated and there are plenty of options including a direct Air Transat flight and connections via London, Amsterdam, Paris and Frankfurt.

Hopefully the promised refunds are forthcoming which opens another set of questions. Firstly, not all passengers will have paid for their ticket in cash but in miles either from Air Canada Aeroplan or through other Star Alliance programs. How would Air Canada provide a refund for such mileage tickets? Secondly, is this refund in lieu to the mandatory EC261/2004 compensation which is 600 EUR or will that be provided separately?

Passengers should be mindful of their rights in the European Union and the airline is required to hand out paper forms outlining passenger rights in case of irregularities. Airlines also have a ‘Duty of Care’ which includes Meals, Phone Calls and Accommodation.

Especially if you have an urgent appointment one should absolutely insist on a re-booking to other carriers which is also a passenger right. It doesn’t need to be the same alliance and the fare class is also irrelevant. The airline is require to re-book you into the same class of service even if it’s a full fare class. Airlines have agreements between each other as far as compensation goes and they only pay a reduced rate for these FIM accommodations, never the full fare.