This past weekend I spent three nights in Bangkok, which I hadn’t visited for several months. The set Uber prices to/from Suvarnabhumi airport were previously ridiculous compared to prices that the regular taxis charge.

Sebastian alerted me before that Uber had (at least temporarily) lowered them making the service more inline with what taxis charge and I decided to give it a try. I do use Uber extensively and in Bangkok too but up until then not to/from Suvarnabhumi airport. 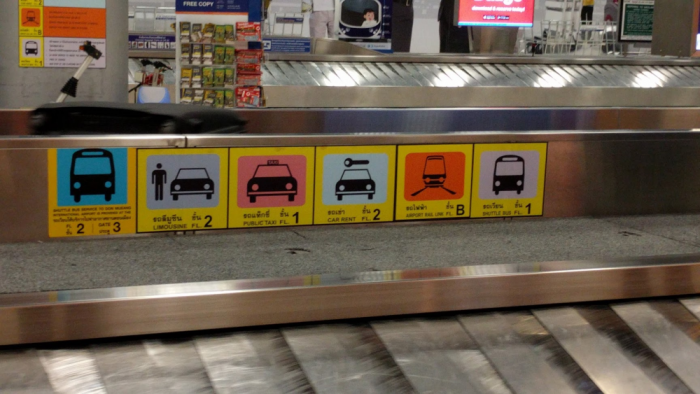 I was fiddling with my phone while waiting for a checked bag to find out what the Uber options from the airport to city are. The regular taxis are at the level 1 (one below the arrivals) and Uber would be on the same level with limos and other pick ups.

The app indicated that I should request a car once I was out of the customs… that is fine. 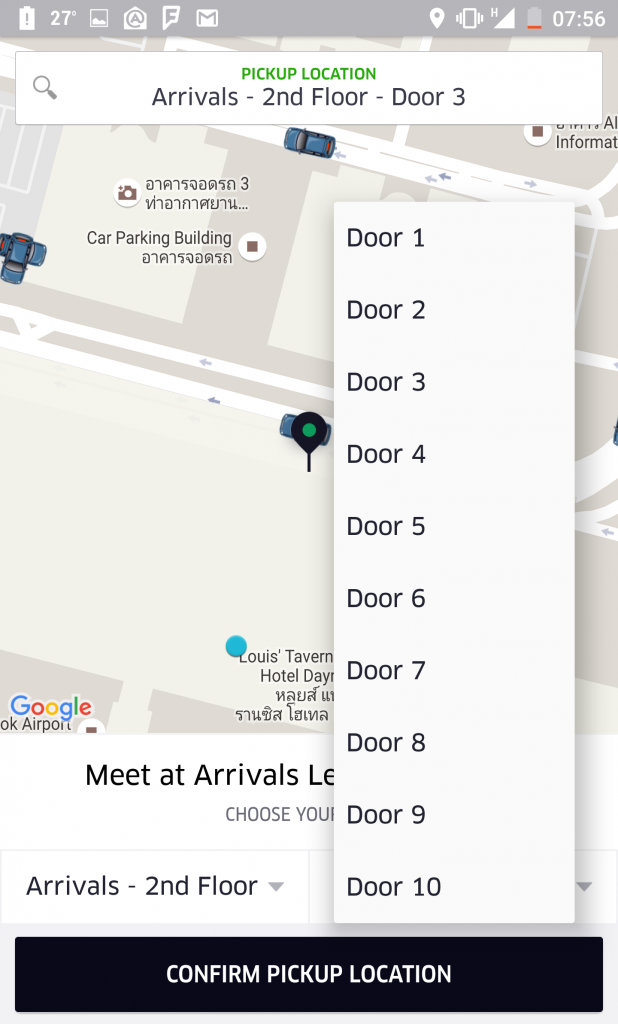 I also had to request a designated door outside so that the driver would know where to pick me up. 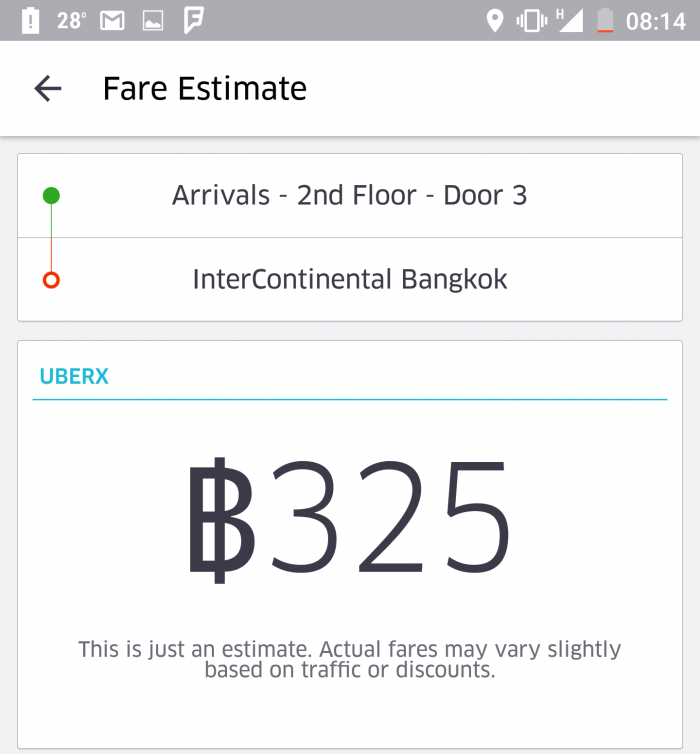 The price from the airport to the hotel would be 325 THB (I was not sure at the time if the toll fees were included or not.

Walked out from the customs area after getting the bag.

Checked the number of the pillar and requested the car.

It appeared that the car would have been waiting in the garage and took roughly five minutes to get to the right spot. 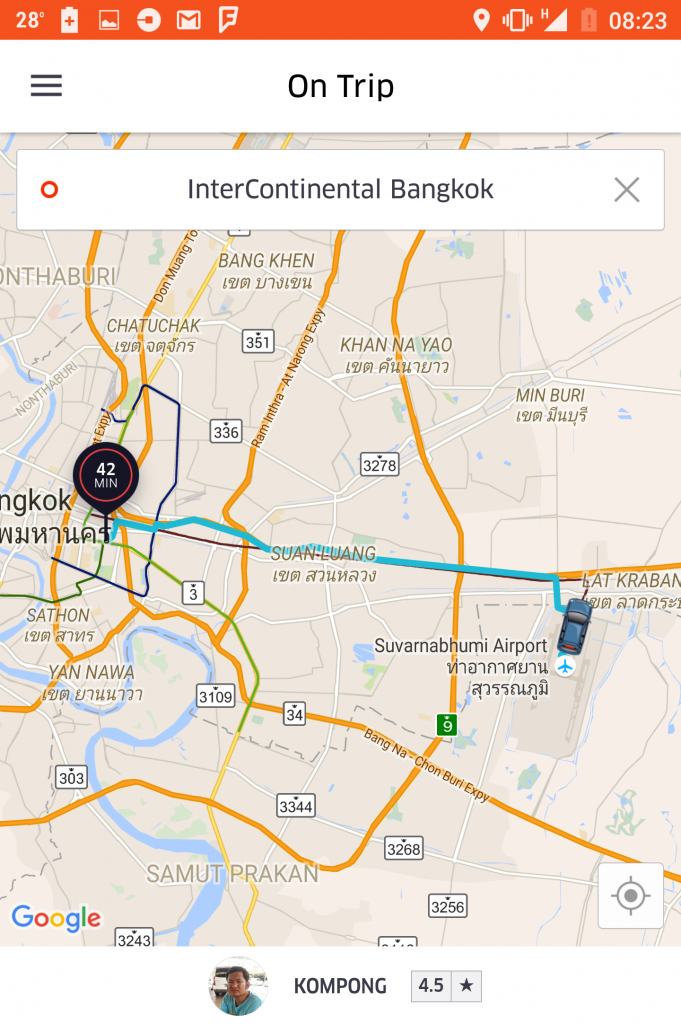 The app estimates that the trip would take 42 minutes. 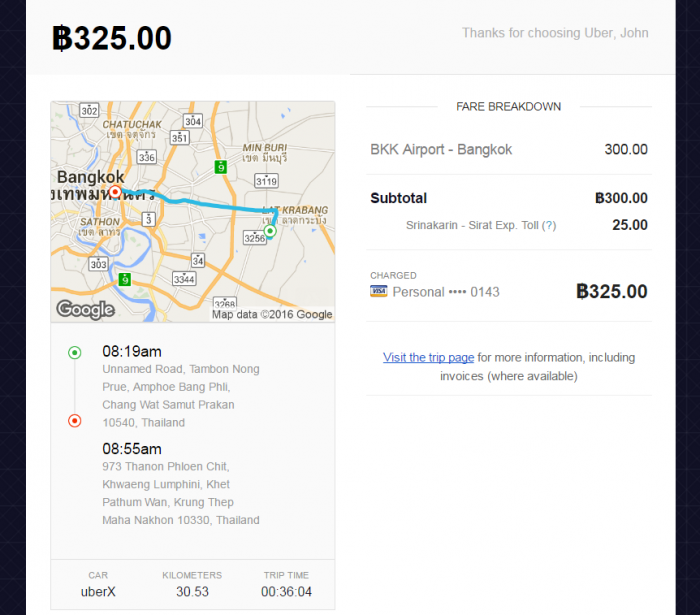 The trip only took 36 minutes and the base fare was 300 THB with one 25 THB toll added. The driver took the surface roads after the first toll that were not clogged as they sometimes are.

I have had some great difficulties getting an Uber from the InterContinental to anywhere. Seems that many of the drivers are not familiar with the traffic flows and shortcuts around the hotel. If the driver misses the correct turn as the Uber ones often do it is better to cancel than waiting for their next chance of getting the turn right 15 minutes later.

I made the request while chatting with friends in the club lounge and wasn’t really in a hurry to get to the airport (yet). The initial arrival time estimate was a few minutes but the driver ending up taking a wrong turn. 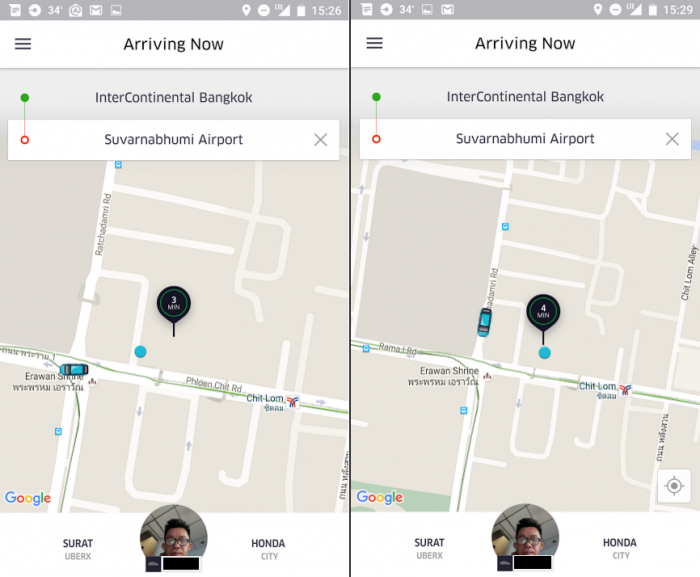 Then he drove completely in the wrong direction for a while and took another wrong turn 30 minutes later. At this time I just canceled the trip and took a cab.

Obviously Uber tried to charge me a cancellation fee for dumping the trip after five minutes but they relented after an email to them. They really should not charge fees for canceling if the initial arrival estimate is off by 25+ minutes or when inexperienced drivers are not able to find correct addresses.

Uber worked surprisingly well from Suvarnabhumi airport and from the looks of the car, I believe that it may have been listed under both Uber X and Uber.

While I was waiting for the Uber car in Bangkok heat after a four hour red-eye flight, I was wondering whether the wait is worth it or not. I usually pick up a cab from the departures area and be on my way in seconds (you are not supposed to take a cab there but it is possible).

I have learned to cancel the Uber trips when driver fails to find the address. I am not there to babysit the driver or call them and give instructions. Uber works better in some cities than others. It seems that the location of the InterContinental hotel is challenging for many of the Uber drivers.