Air Canada has made it back in the news and yet again it’s anything but positive as they bumped a minor of 15 years off a flight from Toronto to Halifax, leaving him stranded for a full day (and night). 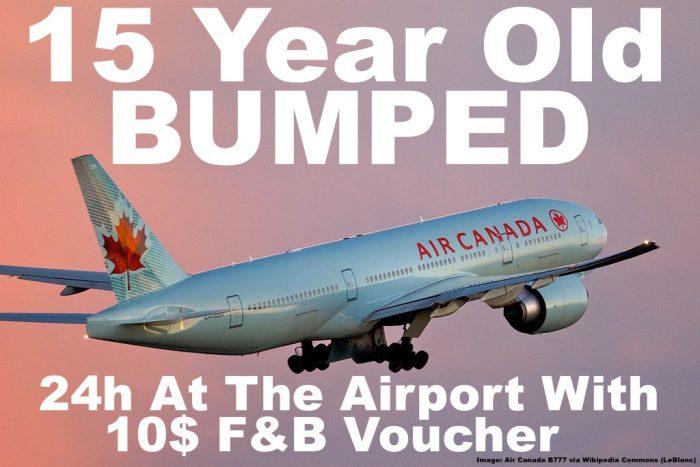 The boy was dropped off by a relative at Winnipeg Airport where he got on a connecting flight to Halifax via Toronto which is where things got a little out of control.

Even as a minor, being 15 years of age does not require for children to be designated Unaccompanied Minors’ which is a program the airlines offer to provide documented care for young travelers. Actually the opposite is the case as Air Canada only offers this service domestically on non-stop flights which didn’t apply in this case.

CBC (access here) reported about the incident and talked to the boys grandfather.

Two weeks ago, Hayden Levy left Winnipeg after visiting relatives and landed in Toronto for a stopover. The 15-year-old was bumped from his flight to Halifax and spent almost 24 hours on his own at the airport. “They gave him a $10 food voucher, which basically in the Toronto airport buys you nothing,” said Brian Truelove, Levy’s grandfather. …

Air Canada spokeswoman Isabelle Arthur told CBC News in an email that mechanical problems meant they had to use a smaller plane for the flight to Halifax, causing some passengers to be bumped.

He added the airline only became aware the next morning that Levy was a minor travelling alone.

Reber also said the night Levy was bumped from his flight, there were no hotel rooms available for any passengers because of a major convention in Toronto.

Air Canada’s director of media relations said minors are not bumped from a flight as long as the airline knows they are a minor and “had Hayden’s reservation noted he was 15 and travelling alone, he would have never have been removed” from his flight.

This situation cries incompetence all over but without rushing to conclusions let’s have a look at the situation here. When you book a ticket it doesn’t require or even offer to insert the Date of Birth for domestic flights on the Air Canada website.

What baffled me though was that the boy is 15 years old and the AC website does offer to book ‘Youth’ fares for passengers between 12-15 years of age.

Now, if the flight was booked through an Online Travel Agent (OTA) such as Expedia this option is not there and it wasn’t specified in the CBC article which booking channel was used. If they booked this way through Air Canada’s own website however it would be very clear from the booking alone to have a minor on hand.

There are two more instances where this mistake can be caught. At some point the gate agent has to interact with the passenger to communicate to him that he will be bumped. Now, not every 15 year old looks like a young child but I say that you can make out some youthfulness with the majority of 15 year old guys and the gate agent should have at least asked to see his ID or outright ask for his age. In fact this should be policy.

Also passengers are always presented with an overnight hotel voucher and the staff at some point actually told him that he is too young for a hotel room to stay on his own. It’s indeed mind boggling how an employee at this point the latest doesn’t have an alarm bell going off as he/she notices the mistake and immediately notifies station management. Instead this all sounds like a bad cover up attempt.

At first he probably looked like the ideal candidate for a bump based on various parameters (Low Fare Ticket, No Status, Inexperienced Traveler). Then the staff tried to get rid of the passenger as easy as possible and by the time they noticed their mistake it was already too late. Instead of notifying management however the line employees covered for each other and left the boy on his own.

How about the reaction of Air Canada after all this blew up?

Truelove says when he called Air Canada’s customer service line, the airline apologized and gave the young man a $400 voucher toward future travel. Air Canada, however, said Levy was compensated at the time his flight was delayed and not when his grandfather called later.

Air Canada spokeswoman Isabelle Arthur said there was no indication on the booking file that the passenger was 15 years old, but Truelove said Levy’s stepmother had written on his ticket that he was a minor. In a subsequent email Wednesday, Air Canada said its policy is to take care of younger customers in need of special assistance.

“This includes arranging for a hotel room, subject to availability, with a chaperone,” wrote John Reber, Air Canada’s director of media relations.

“In the event hotel rooms are not available, we have backup plans involving staff who stay with the child.”

He added the airline only became aware the next morning that Levy was a minor travelling alone.

Reber also said the night Levy was bumped from his flight, there were no hotel rooms available for any passengers because of a major convention in Toronto.

He said minors are not bumped from a flight as long as the airline knows they are a minor and “had Hayden’s reservation noted he was 15 and travelling alone, he would have never have been removed” from his flight. …

Arthur said the airline’s policy around young travellers is clear.

“Even if a parent has not asked for our unaccompanied-minor service, our agents will take care of a child or teenager in need of support,” she wrote.

“Once our agents realized he was a teenager, we made arrangements for him on a later [flight] with a relative.”

But Truelove disputed that claim, and said his grandson travelled from Toronto to Halifax alone.

Arthur said it’s important for parents to make sure the airline has all the necessary information in their files including the age of younger travellers who are travelling alone and emergency contact information.

I can’t believe Air Canada actually tried to make up excuses for this case and tries to find blame with the passenger and his guardians instead of recognizing where the blame really lies: Air Canada’s incompetent staff and insufficient booking infrastructure that doesn’t require for a Date of Birth to be provided. They even went so far and lied about the ongoing travel arrangements which doesn’t even make sense. Where would a relative all of a sudden come from at Toronto Airport?

Air Canada offers an unaccompanied-minor service for a fee of $100 plus tax, where staff will escort children and young people from the check-in area to their destination. It is mandatory for children aged eight to 11, and optional for youth aged 12 to 17. It is only available on nonstop flights.

So even their official UM service (see here) would have been unavailable, even if the parents had tried to book it. There is really nothing more to say about this case.

The parents should file an official complaint with Canadian Transportation Agency and consult an attorney to sue Air Canada.

Not sure what is more shocking, the fact that this actually happened or that Air Canada actively tries to sweeten their case and cover up the conduct of their staff.

On top of it all this is not the first time exactly the same situation occurred with Air Canada in Toronto as the article states that in 2013,  a 13-year-old boy spent the night unattended in the same airport with a $10 food voucher when bad weather caused a flight cancellation. Other passengers on that flight spent the early morning hours in a hotel.

In any way parents or guardians who send their children traveling on their own (be it as an official Unaccompanied Minor or not) should check in together with the child and verbally tell the check-in agent that the passenger is a minor and to provide special care in terms of looking over the reservation. If the agent appears to be disinterested ask for the manager.

Thai Airways isn't doing much flying these days and someone had the great idea to transform a staff canteen at the company's head office...

World Of Hyatt Members Can Earn 3X Points On Dining At...