A female Mainland Chinese traveler en route from Dubai to Hong Kong was arrested upon arrival for assaulting a Cathay Pacific flight attendant with a cup of orange juice after a quarrel about her kids meals. 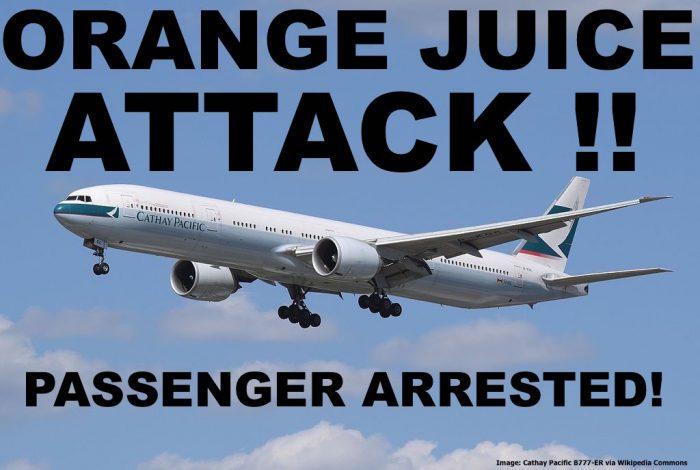 After she hurled the orange juice at the flight crew the woman was hauled off the plane by several police officers as soon as the flight arrived at the gate.

Another one for the blacklist because this attack will for sure not be without consequences for the woman, especially after being arrested.

A 36-year-old woman was arrested on Saturday morning for common assault after allegedly throwing orange juice at a flight attendant.

Police officers met Cathay Pacific flight CX746 from Dubai on arrival at Hong Kong International Airport at 5am to arrest the disruptive passenger.

The mainland traveller was hauled away by several police officers after throwing juice at a 25-year-old female flight attendant. The row began when the woman, who was travelling in a large party, got angry because meals for children had not been prepared in advance.

This sparked an altercation with cabin crew, leading to orange juice being thrown. A police report said: “Personnel arrived at the scene, and the victim was not hurt.

The woman was arrested on suspicion of common assault, the report continued. A Cathay Pacific spokeswoman said: “A passenger caused an incident this morning on flight CX746 from Dubai to Hong Kong, and a case has been submitted to the police, therefore I am unable to provide more information.”

I’m sure this little incident didn’t exactly speed up the delivery of her kids special meals. Probably exactly the opposite.

Not sure why some of these Mainland Chinese get so out of control. I guess one can just chalk it up as behavior of inexperienced travelers who have unrealistic demands and expectations of what duties a cabin crew is supposed to perform for them.