Boeing Might End Production Of The B747 “Queen Of The Skies” – The End Of An Era?

In a recent regulatory filing The Boeing Company revealed that demand for the B747 has decreased so much that the company might decide to discontinue the production of the iconic airliner. 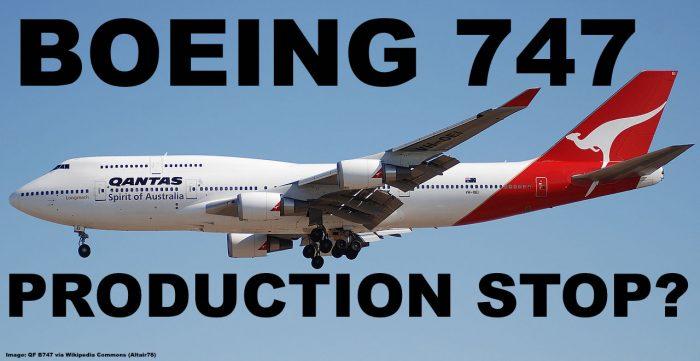 First flown commercially in 1970, the 747 held the passenger capacity record for 37 years and became a favorite with travellers who would be sad to see the “Queen of the Skies” go.

The most recent version of the 747, the Boeing 747-800 had just 51 orders for the passenger version and 74 orders for the freighter model. The popularity decreased in times when other models such as the Boeing 777 and the 787 Dreamliner became more popular with the airlines.

In a quarterly filing with the U.S Securities and Exchange Commission (see here) Boeing outlines their current position on the 747 program.

Lower-than-expected demand for large commercial passenger and freighter aircraft and slower-than-expected growth of global freight traffic have continued to drive market uncertainties, pricing pressures and fewer orders than anticipated. As a result, during the second quarter of 2016, we canceled previous plans to return to a production rate of 1.0 aircraft per month beginning in 2019, resulting in a reduction in the program accounting quantity from 1,574 to 1,555 aircraft. This reduction in the program accounting quantity, together with lower anticipated revenues from future sales and higher costs associated with producing fewer airplanes, resulted in a reach-forward loss of $1,188 million in the quarter. The adjusted program accounting quantity includes 32 undelivered aircraft, currently scheduled to be produced through 2019.

We previously recognized reach-forward losses of $885 million and $70 million during the second half of 2015 and the first quarter of 2016, respectively, related to our prior decision to reduce the production rate to 0.5 per month and anticipating lower estimated revenue from future sales due to ongoing pricing and market pressures.

We are currently producing at a rate of 1.0 per month, and expect to reduce the rate to 0.5 per month in September 2016. We continue to have a number of completed aircraft in inventory as well as unsold production positions and we remain focused on obtaining additional orders and implementing cost-reduction efforts.

If we are unable to obtain sufficient orders and/or market, production and other risks cannot be mitigated, we could record additional losses that may be material, and it is reasonably possible that we could decide to end production of the 747.

Popularity of another Mega-Aircraft, the Airbus A380, has also contributed to the lower demand of the new 747 models.

The 747 has seen a good number of high profile accidents and bombings since it’s inception. The most notorious ones are the Tenerife Runway Collision, Japan Airlines flight 123 which crashed into a mountain, the PanAm Lockerbie bombing, TWA Flight 800 and Air India 182.

It would be sad to see the B747 disappear butt of course even if the production were to stop completely we would see the Queen of the Skies as the 747 is called for many decades at airports around the world. It’s not uncommon for aircraft to be in service for 20-30 years with proper maintenance. Usually the planes are being handed down from the big airlines to smaller charter companies and airlines for example in Africa.