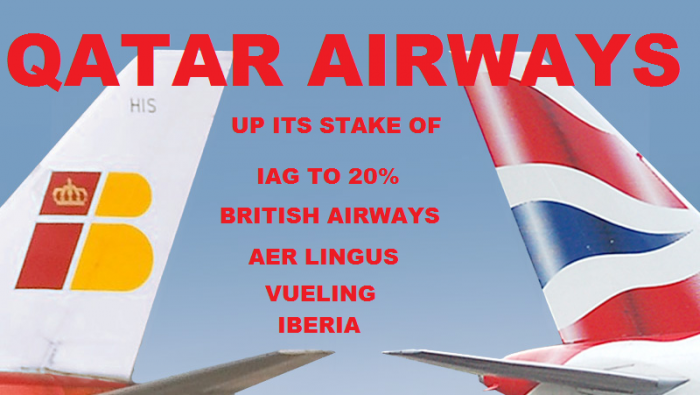 The airline made an announcement over the weekend that it had upped its stake of IAG (the parent of British Airways, Iberia, Aer Lingus and Vueling) to 20.01% after the share price of the IAG had “crashed” due to the Brexit vote.

Qatar Airways lifted its stake in British Airways-owner IAG by about 4.34 percent to 20 percent but said on Monday that was its limit, buying shares worth about 375 million pounds on what it called an attractive buying opportunity.

Shares in IAG have lost about a quarter of their value since Britain, the airline group’s biggest market, voted in June to leave the EU. British companies have also become 10 to 15 percent cheaper for overseas buyers due to the devaluation of the pound since the vote.

State-owned Qatar Airways said it had raised its stake to 20.01 percent from 15.67 percent, sticking to its oft-repeated intention to increase its holding over time. It first invested in the company in January 2015.

And here’s from Financial Times (access the piece here):

“We continue to be highly supportive of IAG’s strategy and management team and we do not intend to increase our percentage shareholding further unless there are material changes to the current situation,” Mr Al Baker said.

Qatar’ stake building in IAG, which also owns Spain’s Iberia and Vueling and Ireland’s Aer Lingus, is part of wider efforts by Qatar and Abu Dhabi’s Etihad, its rival, to catch up with Dubai’s Emirates.

It remains to be seen how successful these investments done by both Etihad and Qatar Airways turn out to be. Both airlines have invested in number of carriers around the world, although Etihad has integrated them more closely to its business.

European airlines are battling the gulf carriers that are busy buying stakes on them. May be a way to silence the criticism?