NY LaGuardia Airport: 15 Passengers Not Screened At Checkpoint Because TSA Forgot To Plug In Body Scanner

The TSA at New York LaGuardia Airport had another embarrassing blunder as they forgot to plug in/activate a body scanner at the checkpoint and didn’t notice it until 15 passengers already went through. 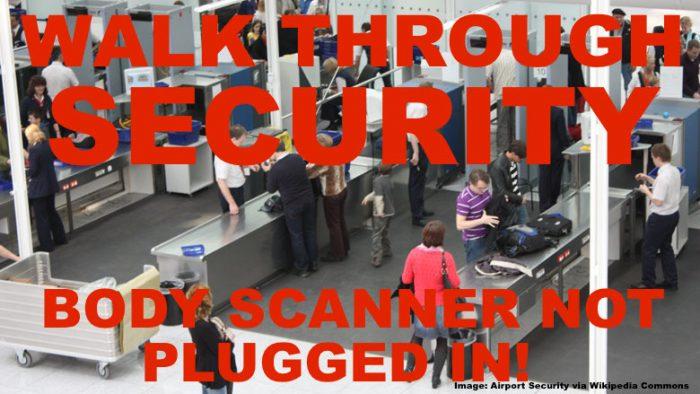 Officers then went on a hour long hunt for the 15 passengers but only identified nine of them while the remaining six boarded flights and were never seen again.

One has to wonder how many errors a security agency can make before finally being recognized as a complete bozo organization funded by the taxpayer.

You can find the related story at the New York Post here.

At least 15 travelers strolled through a TSA checkpoint at La Guardia Airport without being searched because someone forgot to plug in the security scanner, The Post has learned.

“Our nation’s security is dependent upon whether or not a TSA screener plugs in the screening machine,” a furious law-enforcement official said.“There has to be a better way.”

The snafu was discovered at about 8 a.m. Sunday inside Terminal D by TSA Agent Eva Cocoli, according to sources.

Finding them took about an hour, and they all had to be brought back to the checkpoint to be properly inspected. “It was a big inconvenience,” said a woman who was among the nine who were rescreened.

After checking surveillance footage, authorities determined that at least six other passengers who went unscanned were not located and were assumed to have boarded planes, police officials said.

Unbelievable that even a simple task such as switching on the device you’re primarily working with is already too much for the local TSA to accomplish.

Another set of passengers inconvenienced due to the incompetence of TSA staff which (based on their own assessment) misses 95% of contraband which test agents tried to smuggle through the checkpoints. Job well done!