When watching the burning Emirates Boeing 777-300 airplane at the Dubai airport and what little was left of it once the fire was put out, it is quite remarkable that none of the passengers died. It was unfortunate that one of the firefighters passed away, however. 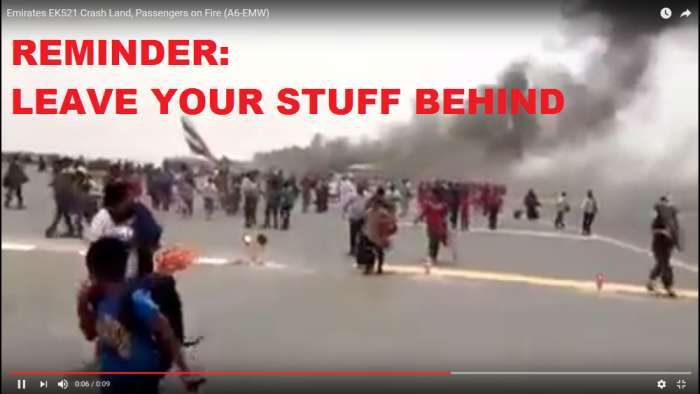 It was little troublesome when I was watching CNN last night seeing passengers dragging their carry-ons while evacuating from the aircraft. In some other instances, this may have led to casualties.

Here’s the video inside the plane:

Here’s video from the tarmac:

In the very unlikely situation that an airplane you happen to be in must be evacuated, just leave all your stuff behind. Clothes and electronics are easily replaced and are not worth human lives.

Passports and other travel documents can easily be replaced pretty much anywhere in the world and certainly in the UAE where most countries have their embassies in Abu Dhabi and consulates in Dubai.

I am not blaming the passengers in these videos but just reminding that this could have ended terribly wrong for many.  Time spent opening an overhead bin and grabbing your carry-on to make sure Auntie’s sweets don’t go up in flames is better suited in not blocking the access of others and getting oneself and others out the emergency exit.

This is not the first time I have seen this (nor the last I am afraid), I recall seeing photos of AF 358 a decade back when it skidded off the runway in Toronto.  There were a couple of still photos (this was before most people had smartphones) of people outside the burning fuselage with their briefcases and carry-ons.