In the last couple of weeks a few stories made headlines where passengers were demanding flight attendants to lift their carry on baggage for them into the overhead bin and personally I think that’s just wrong. 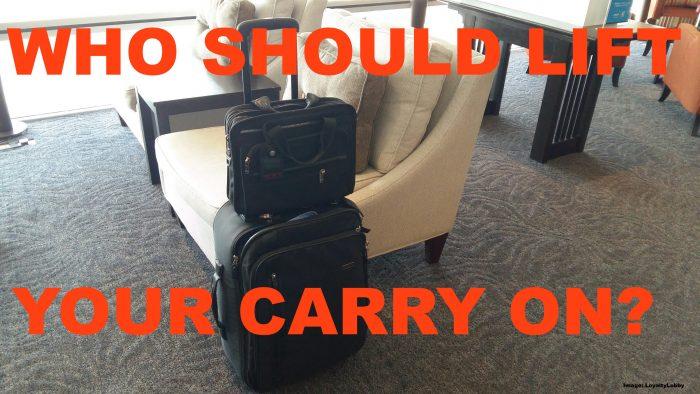 Apart from common courtesy of not asking someone else to lift your bag into the overhead when it’s not part of their job description some passengers do so because ‘they can’t lift it themselves’.

Often you hear excuses of a medical condition or general inability to handle big baggage probably due to age which allegedly prevents passengers from lifting their own bags into the bin. Interestingly enough they managed to bring the carry on all the way from home on board the aircraft which certainly involves lifting.

The most recent case was a Southwest Airlines passenger who even went as far as complaining to the airline on Facebook that the flight attendant refused to help him. The complaint included pictures of the crew member. 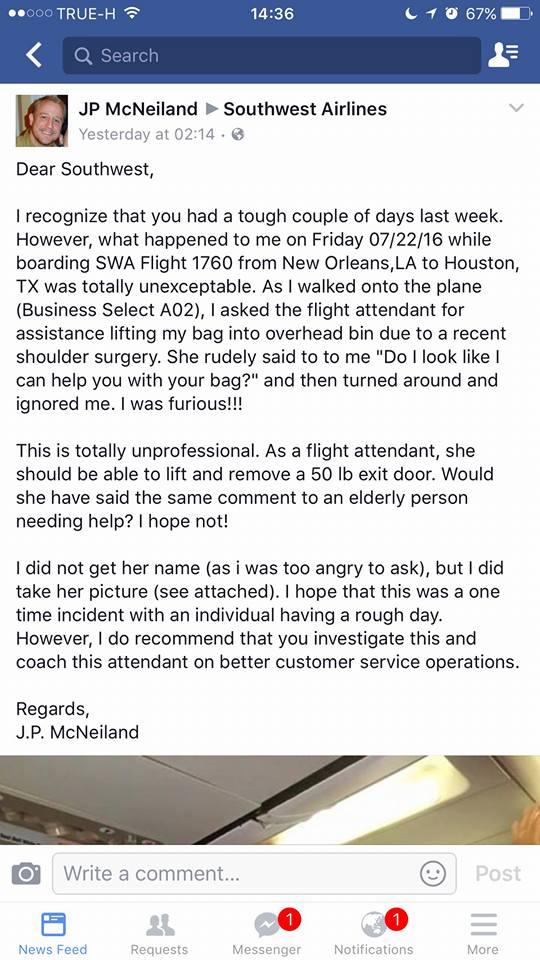 This form of public complaint didnt go so well for Mr. McNeiland as the sentiment quickly went against him, triggering thousands of posts calling him names based on his behavior.

There was also a news article on Metro UK (see here) that highlighted the case.

A furious airline passenger was left with enough egg on his face to make an omelet after his complaint left him a target on social media this week.

JP McNeiland had taken to Facebook to air his anger after a flight attendant allegedly refused to lift his bag – however instead of support he received more than 1,000 comments of abuse.

Branded a ‘total jerk’ by an airline customer (a comment which received 4,315 likes), the business-class flyer was shunned over and over again in a series of spiteful posts.

Another case goes a while back involving a woman who was actually helped out by a crew member to stow her baggage overhead but then injured herself while pulling it out after landing. She is now suing American Airlines for negligence (see Miami New Times article here).

The plane landed at Miami International Airport August 28. And when Ayyash tried to remove her bag, she says, it was so tightly wedged into an overstuffed baggage compartment she had to yank to get it out. Ayyash says she had to pull the bag out with so much force that it flew out of the compartment, hit her in the chest, and knocked her into the armrest behind her.

Some would see this as a case of bad luck after an already-frustrating day of air travel. But Ayyash sees it as negligence and filed suit against American Airlines in Miami-Dade County Court June 14.

I guess there is always a reason to sue even if whatever happened is due to someones own stupidity such as in this case.

Why don’t people who can’t handle their own baggage simply check it in and pick it up at their final destination? The answer to this could be either they are simply too cheap to pay for check-in baggage, too entitled to think this is something necessary or as many of the Facebook comments on the Southwest page suggest ‘complete jerks’.

In many countries or airlines respectively, flight attendants are not supposed to handle passenger baggage and are not insured for various damages in case they injure themselves during such task.

Personally I almost always refuse to lift someones bag up unless maybe it’s a little old lady and even then I feel compelled to suggest that it might be more convenient for her to just check it in. I recently picked up my own carry-on the wrong way after an x-ray scan at the arrivals area and twisted my back in such a painful way that I had to see a chiropractor and felt the results for five days. Be careful with your baggage and just check it in if it’s too heavy or you feel it could become a problem lifting it.