A Jet Blue flight from Boston to Sacramento hit some bad turbulence this Thursday, resulting in 24 passengers and crew to be hospitalized to treat injuries resulting from this incident. 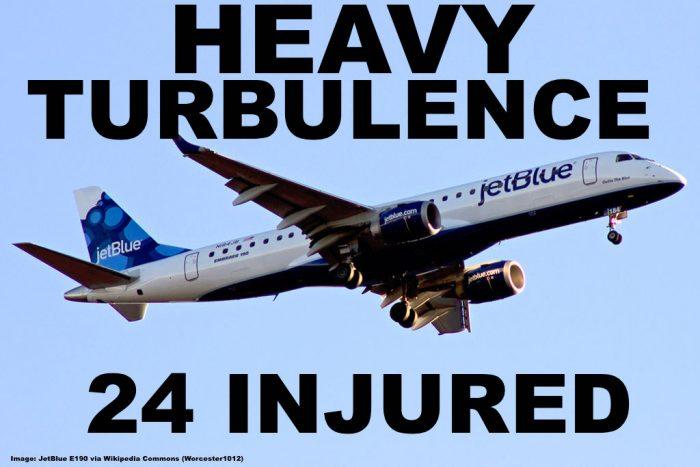 The flight was diverted mid way after it was clear that the injured required medical attention and paramedics were standing by right after landing.

Injuries of passengers resulting from turbulence are often the result of not using the seat belt as required when the pilots switch on the fasten seat belt sign or from items being catapulted through the cabin.

NBC News (access here) had a short story about it this flight.

Twenty-four people were taken to the hospital after turbulence forced a JetBlue flight to make an unexpected landing.

JetBlue said 22 passengers and two crew members were transported to a local hospital for evaluation.

All were treated for minor injuries and had been released by early Friday, Rapid City Regional Hospital told NBC News.

JetBlue said 22 passengers and two crew members were transported to a local hospital for evaluation.

All were treated for minor injuries and had been released by early Friday, Rapid City Regional Hospital told NBC News.

A replacement aircraft was en route to help the remaining passengers continue on to Sacramento, the airline added in a statement.

The article doesn’t mention why the passengers were injured apart from the main cause (turbulence) but considering the two flight attendants who obviously do duty in the cabin there isn’t any reason for the other twenty two for either being not buckled up of out and about in the cabin. I have never seen 22 passengers using the restroom at the same time on domestic flights, especially not with bad weather ahead.

Whatever happened on this flight it was serious and passengers should really follow the advise of the airline to wear the seat belt at all time while in flight, even if the captain did not switch on the seat belt sign. Chances are many injuries could have been prevented if passengers were properly strapped down.