British Airways is trying to get leaner and in the process decided to make their passenger fatter by serving Mars Candy Bars as a second meal before arrival on flights below seven hours duration. 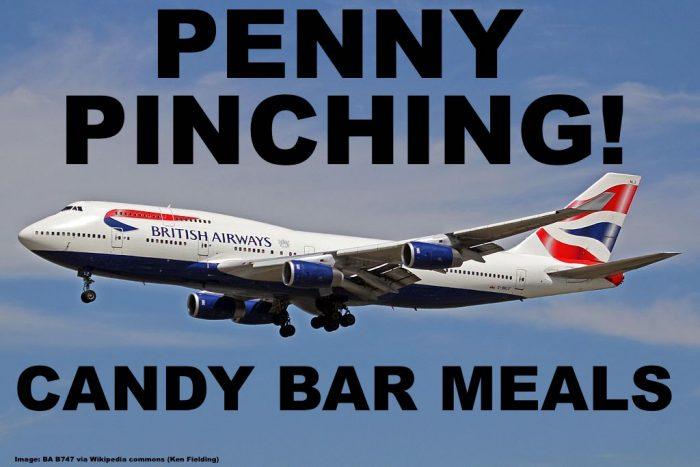 This pre-arrival meal always used to be a sandwich and snack but has now been reduced to a small ‘fun size’ candy bar.

The move by British Airways management who argue the enhancement was done after market research and analyzing customer demand. Whoever participated in this survey got less then they bargained for as passengers are outraged and the crew is embarrassed after ending up with the Mars bar as second meal option on these shorter long haul flights which also include London to New York.

There was an article in The Sun this week (see here) that reflected on this story and BA management.

British Airways will now serve passengers just one fun-size chocolate bar instead of a meal on long-haul flights, in an attempt to save money.

Hungry passengers who used to get a proper sandwich and snack before landing blasted the measly offering last night.

Cabin crew still serve a main meal earlier in flights but have been left squirming at what has replaced the second one.Previously, passengers would awake from a seven hour trans-Atlantic flight to a small sandwich, but now penny-pinching bosses have given strict instructions customers can only have one mini choc bar each.

The new menu, sneaked in last month, was branded an “insult” by one passenger who paid £500 to fly from Heathrow to New York.

The flyer, who was in a World Traveller class seat, fumed: “To get just a fun-size chocolate bar is a joke.”

While another passenger said: “It was a joke. I paid £500 for a World Traveller Plus seat and the breakfast was OK but to then get just a fun size chocolate bar six hours later is outrageous. …

Now, a 500 GBP return ticket in World Traveller Plus, BA’s Premium Economy Class, is a rather good deal but the point is not the money or price of the ticket. Ticket prices are within the airlines control but if you sell something that has the description ‘Premium’ then replacing a meal with a chocolate bar isn’t exactly reflecting positively on the company. I’m surprised by the move to even introduce this in WT+ as I found the meals in that cabin to be very good previously.

A cabin crew member confessed: “Things all changed about a month ago and it was brought in on the quiet – the feeling is if there is a way for management to save money then they will find it.

“The official line is that after a review it was decided to cut back on services offered on flights below seven hours which is practically most of the eastern United States. “It’s actually quite embarrassing for us and quite rightly passengers are outraged.”

Just months ago BA, whose new chief executive Alex Cruz used to work for Spanish low-cost carrier Vueling, denied planning to charge for in-flight food, and instead the company are thought to have saved by cutting back on what offers.

The airline said yesterday: “After a recent review, we no longer provide the second service meal box in World Traveller on flights under seven hours.” A BA spokesman added: “We offer customers on all of our transatlantic flights a three course meal, bar service and snacks and on our longer transatlantic flights, including to the west coast, customers are offered an extra meal during the flight.

“We regularly review our catering to ensure we are investing where it matters most to our customers.”

I guess that’s what you get if you make a low cost carrier CEO the boss of a scheduled carrier. It was widely rumored that Cruz is also responsible for the Chaos around Vueling which ensued short after he departed his post, leaving his successor in hot water with Spanish authorities after thousands of flights are being cancelled to to lack of adequate staffing and overselling.

The crew is now left to confront angry passengers on a daily basis over this new ‘enhancement’ which is indeed a bad joke for a legacy airline like British Airways.

Passengers want to pay less and less which understandably puts a lot of pressure on the airlines and the market itself. On the other hand the airlines are willing participants in driving the prices lower and lower while cutting back on essential services such as checked and carry on baggage, inflight meals and overbooking of their flights. If BA stoops to levels of low cost carriers on Transatlantic flights then this is very bad, especially in the World Traveller Plus cabin.