Japan is planning to introduce a pilot test program to introduce Pre-Clearance Immigration Facilities at key overseas airports starting 2017 and has selected South Korea and Taiwan to be the first stations. 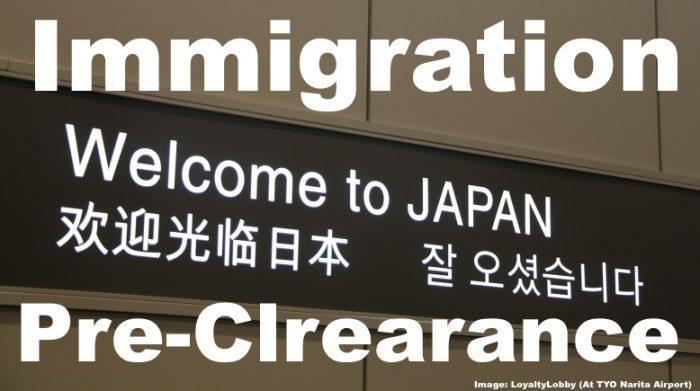 The measure would ease the flow of arriving passengers at Japanese airports, especially in Tokyo and Osaka, where the main purpose is to reduce wait times.

I was surprised when I read about this today because I never had the impression that the immigration procedures in Japan are extremely long and difficult. The most I ever had to wait was 40 minutes and that was 3 years ago. Usually it’s between 1-5 Minutes wait time (if any) and I travel to Japan 6-8 times per year.

You can find the entire background on the NIkkei Asian Review (access here).

Japan plans to let travelers undergo immigration and customs screening before flying into the country, aiming to combat lengthy waits at airports as inbound tourism grows.

Travelers using the pre-clearance program would take care of most of the inspection process at their local airport, including interviewing Japanese authorities and providing fingerprints and photos. They would be directed to a special lane upon arrival in Japan, where they would go through a much-shortened screening, skipping the steps that were handled ahead of time.

The government plans to start with South Korea and Taiwan before expanding the program elsewhere. It is in talks with authorities to send immigration officials to major airports in both locations, aiming to put the program in place in fiscal 2017. …

Even though I give the Japanese a lot of credit for considering the wait times of their arriving international visitors I fail to see the drastic practical and economical benefit of installing overseas pre-clearance facilities.

The method is being used at some Canadian airports for flights to the U.S. as well as in Dublin, Ireland where a U.S. pre-clearance facility is also available. Why is this different? For one, the immigration lines in the U.S. are known to be atrocious and processing travelers is taking much longer than in other countries (at least much longer than in Japan) since the officers apply more scrutiny to most travelers. Secondly the cleared flights will arrive in the U.S. at a domestic gate and don’t require processing through any sort or border patrol or customs office as this is being taken care of at the outstation. To equip these outstations requires enormous investments for an appropriate (sealed) infrastructure at the airport for both passengers and their baggage.

However, the article mentions that the passengers under the Japan solution would still arrive as International and just go through a shorter process. This sounds like a giant mess to be honest. How many lanes are there supposed to be for incoming pre-cleared passengers? There is likely to be wait time involved as well. On top of it (likely) the usual baggage inspection.

These overseas facilities will be very expensive to install, maintain and staff for which the Japanese government will have to pay for. Assuming they are talking about Seoul-Incheon and Taipei-Taoyuan this can only mean maybe 2 designated channels lanes at the immigration hall. The entry/exit immigration at Seoul specifically can be a mess during peak hours (in TPE as well but usually it moves faster) and having a second process for Japan upon exiting the country may frustrate waiting passengers even more. I see zero benefit for the passengers here especially because it’s impossible to seal part of the terminal off for only Japan departures. Stationing Japanese officers abroad will also cost a fortune and the taxpayers are on the hook for all these expenses.

The article has some other details:

The government now lets frequent business travelers use automated immigration gates, which had been limited to Japanese nationals or foreigners residing in Japan. After going through screening at the airport once, travelers can pass through these gates on subsequent trips with just a passport and fingerprint check. …

South Korea and Taiwan together accounted for about a third of visitors to Japan last year, ranking second and third, respectively, data from the Japan Tourism Agency shows.

This is new to me. I will inquire next time and research more what type of Business Visa / Verification is required to utilize this express system (I’m already registered for it as I hold a Japanese residency card).

All good intentions aside but this plan is complete nonsense and I’m surprised it would even be considered within the parameters of the Nikkei article. It sounds like a money burning oven with very limited to no use but the potential for many problems. The article states Japan wants to reduce the wait time in Japan for all arrivals to max 20 min. As I can say from my own experience of entering the country frequently even before having residency the wait on average is already lower than that.

The effort and cost is in no relation to the benefit (if any) that will be obtained through such a system. Keep in mind that all this adds time to the departure process as well. Both Seoul-Incheon and Taipei-Taoyuan are way outside the city requiring passengers to leave town ~3.5 hours prior to departure if they want to be there 2h before the flight leaves. Are they supposed to add an extra time window to this just to save 10 min wait (again, if at all!) at their arrival airport in Japan?

If Japan wants to make it more convenient for travelers from key countries to enter then install a system like Global Entry for Taiwanese/Korean frequent travelers or make it easier to apply for an APEC Travel Card (some if not most countries are a real pain in the rear to get the approval process over with and the card issued). I doubt a leisure traveler will be very impacted by a little bit more wait time to a reasonable degree. We’re not talking about lineups of hours here as it it sometimes the case in the U.S. or even South Korea (I wrote about the situation at Incheon here back in February).