London to Amsterdam by… Boat?

If you’re like me, you’re always looking to get the best value out of your travel dollars and points, even if it means thinking outside the box a bit… which is what I did on a recent trip that involved two of my favorite travel destinations: London and Amsterdam. 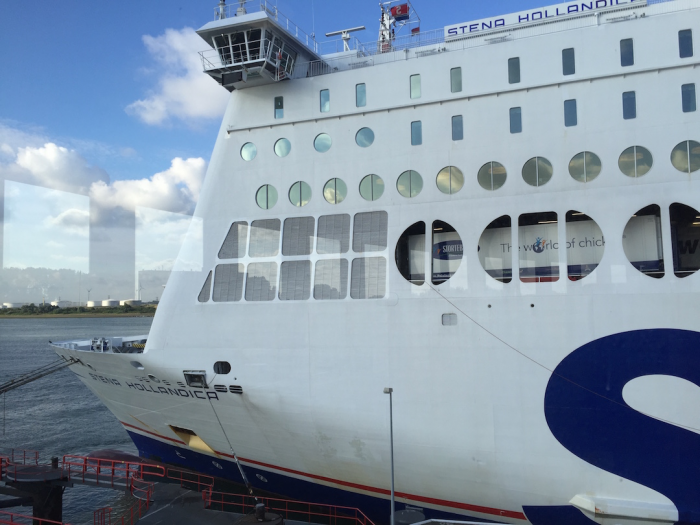 Based in the USA, I had booked most of this trip months in advance including the outbound flight from the US to London and inbound from Amsterdam.  But I realized a few weeks before the trip that I had forgotten to book my short flight in between to get from London to Amsterdam.

By the time I went to book, airfares that can be as low as £39-49 when purchased in advance had risen to about £150 or more for most flights on the day I wanted to travel and award availability using BA Avios was mostly dried up as well.  So I investigated other options.  I thought about taking the Eurostar train (connecting in Brussels) but the timing wasn’t optimal and the thought of spending almost 6 hours on trains without much of a break wasn’t too appealing.  Then I discovered after some online research that you can travel between the two countries by ferry from Harwich, England to Hoek van Holland (Hook of Holland) in the southern part of the Netherlands.  The prices are fairly reasonable and they have packages that include rail travel on both ends. And being the travel junkie I am, I decided it would be a unique experience. 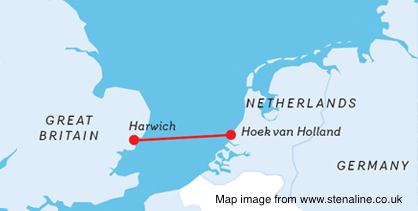 There are two ferries that operate continuously on this route, one during the day and one overnight in each direction, run by the Stena Line, one of the world’s leading ferry operators.  It’s a 7-8 hour trip across the North Sea; ferries from England most days leave at either 9am or 11pm,; the overnight ferry gets into Hoek van Holland at 8am CET (+1 hour from GMT). In the other direction, ferries leave the Netherlands most days at 2:15pm and 11pm and arrive at 7:45pm and 6:30pm respectively with the one hour time difference.

If you buy the “Rail & Sail” package, your train travel is included when using any train on the Abellio Greater Anglia network in the UK (which includes trains from Liverpool Street in London) and to/from any Dutch train station on the national NS train network (except for the high speed Thalys trains).  You can view ferry schedules and pricing and book your trip on the Stena Line website here and you can check train schedules online as well (here for the Greater Anglia network in the UK and here for the Dutch NS network). The Rail & Sail packages start at £49. If you travel on the overnight ferry though, you’re required to book a cabin that starts at £32 (cabin bookings on the day ferry are optional but are offered at ½ price).

I decided to take the overnight ferry as the timing fit my schedule well. I left London Liverpool Street at 7:32pm on a direct train to Harwich, which arrived at 8:54pm. When you arrive at the train station you walk upstairs to the initial check-in area where they validate your journey (be sure to print out your itinerary): 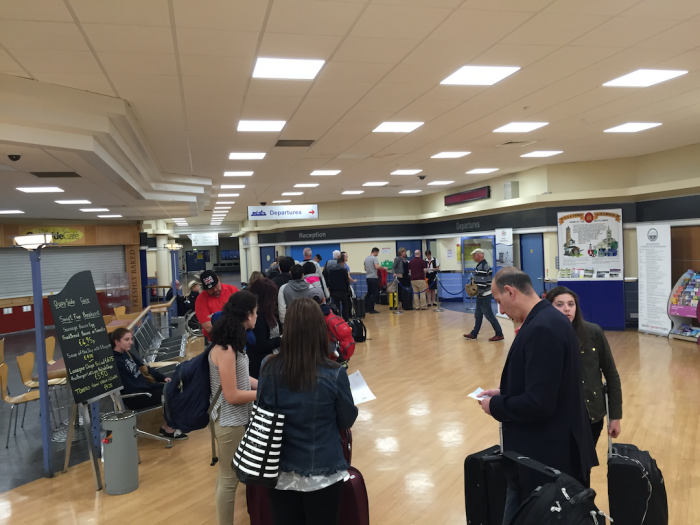 After you check in, you go through a short security check (much less invasive than an airport, you can leave your computers and liquids just where they are!) and then pick up your cabin key and board a shuttle bus that takes you right onto the ship. Boarding begins a couple hours before departure to allow you to get settled into your cabin. Even the lowest category cabins (like the interior one I booked) all have TVs, private bathrooms and showers.  When booking a single cabin, you actually get the same cabin you would get for 2 people (2 beds) but you just pay a lower price. 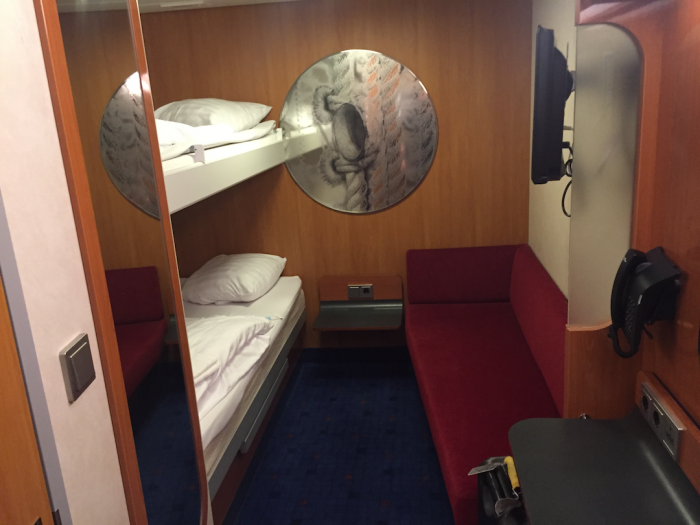 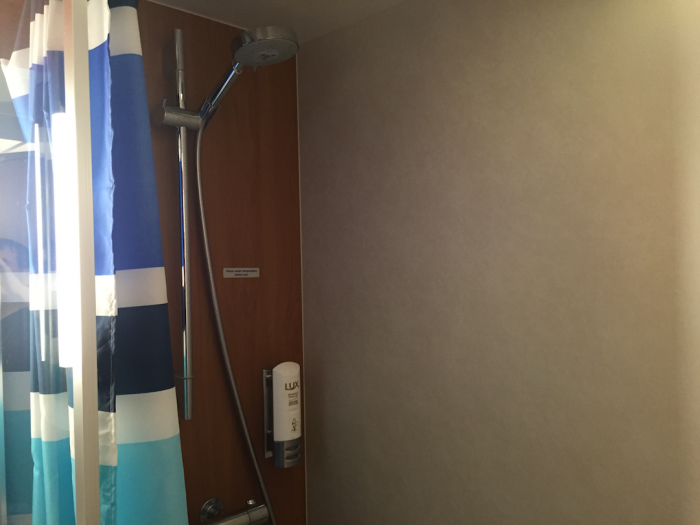 After dropping my luggage off in my cabin I headed to the ship’s dining area to get something to eat.   There is a large cafeteria style restaurant on the main guest deck of the ship with a number of different food options at fairly reasonable prices. 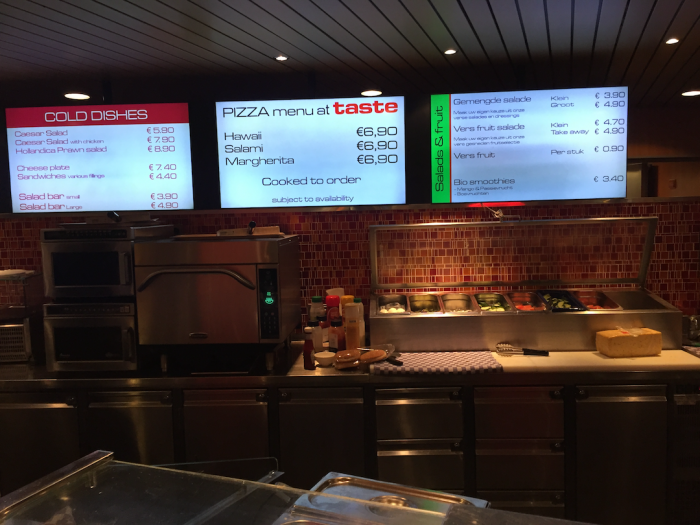 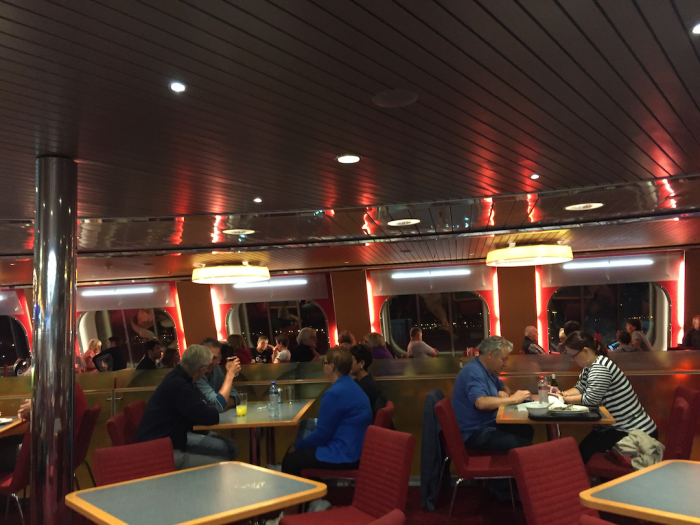 After eating I went back to my cabin and went to sleep shortly after the ferry left the port around 11pm. The seas must have been quite calm because I didn’t wake up at all until the “wake up call” at 6:30am (1.5 hours before docking). I didn’t plan on eating breakfast on the ship so I figured I’d sleep another hour or so, but that plan didn’t work out so well as they kept making continuous announcements (breakfast is served, shop is open, etc.) about every 15 minutes until we docked around 8am Dutch time.

After exiting the ship, the nice weather treated us to excellent views of the port and ship on the way to the immigration queue (you can really see the size of the ship in relation to the trucks in the pic below). It took a bit of time to go through immigration however as there were only two officers processing all passengers, but after about 15-20 minutes, I was processed through and headed toward the train station Hoek van Holland Haven which is only a couple minutes walk away. Trains leave the station bound for Rotterdam about every 15 minutes or so and from there you can connect to a train to Amsterdam or most other destinations in Holland. The journey from Hoek van Holland to Amsterdam Centraal took about 1.5 hours. Google Maps is a very good resource for NS train schedules and will even tell you which platform the trains depart from. 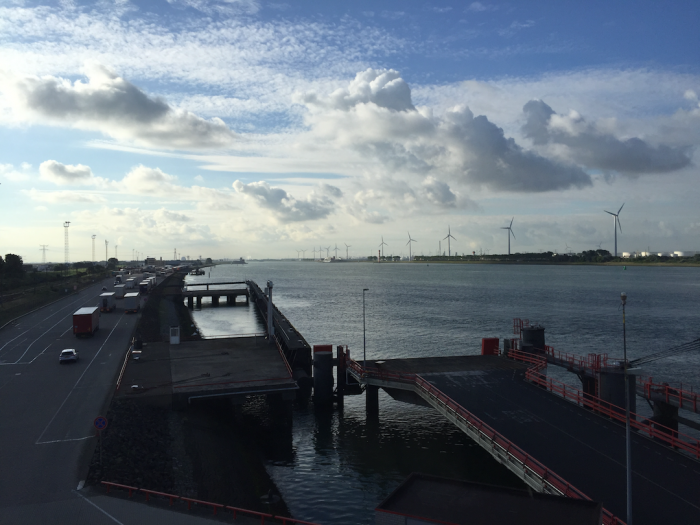 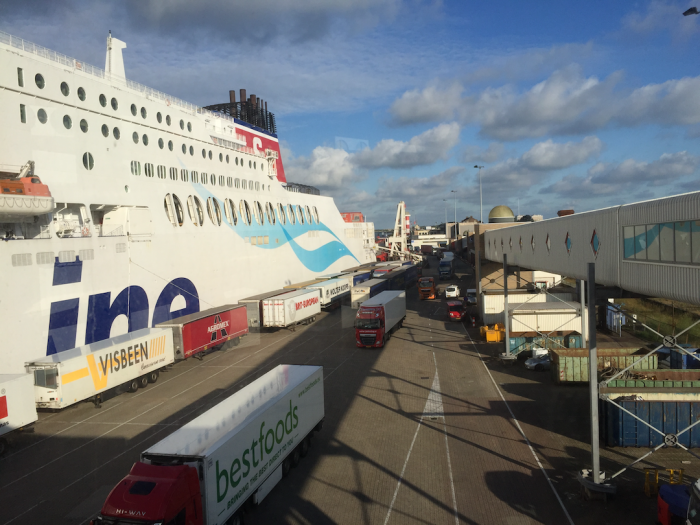 Although some people would cringe at a journey from London to Amsterdam that takes a total of 14 hours, it may make perfect sense cost-wise and even time-wise to many travelers. You can spend almost the entire day in London, sleep in comfort on the way there, arrive showered and refreshed, and spend a total of £80 or so for the entire journey (mine was a little over £100 as I booked late and the ferry was almost full).

If I had flown instead I would have paid £150 for an airline ticket and probably at least £100 for an extra hotel night in Amsterdam. So the savings and unique experience made it worthwhile to me.

Reminder To Stay Safe In Rio And Brazil In General