When I was in Japan late last week and early this week, I used the Shinkansen train service again. And how fabulous it is!

My goal over the past couple of years has been to go to countries and cities that I have not been to previously. I landed in Haneda and was flying out from Osaka. Why not go to visit Hiroshima for a couple of nights?

Hiroshima is roughly 800 kilometers from Tokyo but this takes only four hours if you choose one of the faster trains.

As this was a holiday weekend in Japan (I had no idea) many of the regular cars were sold out but plenty of space in the Green Car (business/first) to Hiroshima.

Unfortunately I had to stand on the Hiroshima – Osaka segment due to all trains and classes being completely full this past Tuesday. 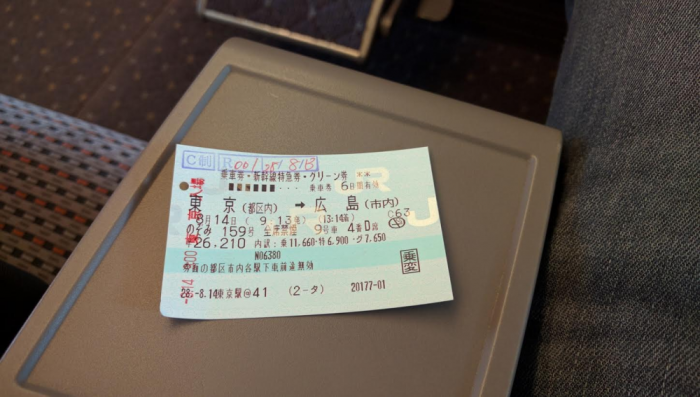 These Shinkansen tickets don’t come cheap. I paid $262 for the Tokyo to Hiroshima one and roughly $100 for the standing only Hiroshima – Osaka one.

There are Japan rail passes available for those not living in the country but you need to purchase them beforehand. I purchased the flight to Tokyo the previous day (my farewell CX 747 F HKG-HND). These train passes can save you lot of money.

800 kilometers in a train may sound a lot but it is only four hours. Taking a domestic flight could have been cheaper but the overall time roughly the same or more.

I managed to miss my Tokyo – Hiroshima train by minutes and thought that it is likely that I lost the entire ticket value (those are the rules). You must make any changes before the train departure time. The JR ticketing office agent disappeared to the back room, came back and issued a new ticket for a train leaving in 30 minutes.

You got to love the frequency of these trains as well. Between the most populous cities they have several departures each and every hour. I wish all countries had train service such as this.