A LoyaltyLobby reader sent me an email about an unsatisfactory experience with Starwood’s Best Rate Guarantee program that I have written several times about. 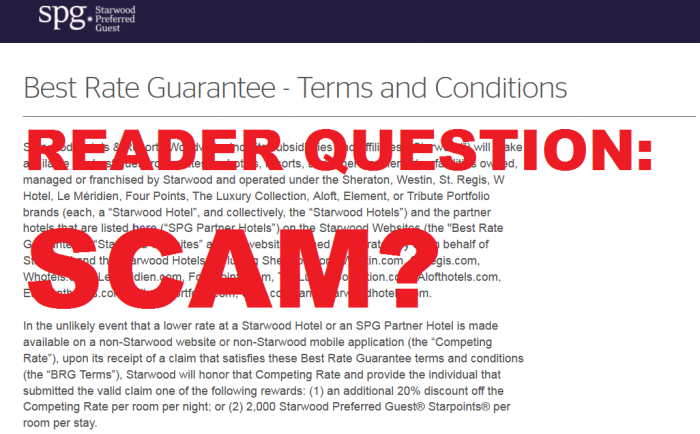 I booked the refundable because SPG BRG is unreliable in terms of response. I’ve had them go 3 or more days in the past and usually the response lines up (purely by chance I’m sure) with a rate change on their website undercutting the BRG claim rate.

At the time I booked, hotels.ca via a Trivago.ca link was selling the hotel at 330 GBP non-refundable and I think 351 refundable. So I filed the BRG claim right away.

I am Platinum 100 so I am a top tier customer with Starwood and have my own concierge. I told her about this in advance as I didn’t trust the BRG process. I asked if she could file for me but she can’t. So, another bonus for SPG, a concierge that cannot even deal with Starwood on your behalf.

I got a denial back within 24 hours saying the “rates changed” and now Starwood has the hotel for 351 GBP (same price as when I claimed) and that this was the best price available as the rep “Couldn’t find availability on Trivago.” I had sent links and said I had screen shots available and so on. They don’t care about this, they just “can’t find it” so they deny rather than ask.

I wrote back and said I could walk them through it, said Expedia.ca now had the 330 rate as well, sent screen shots of both sites, links to both, said that the claim was valid. Said that I had a rate of 378 actually and 351 was not a rate change but the rep misunderstood my booking and that both refundable and non-refundable were less now on two different websites. Ask to escalate to a manager.

24 hours later, get a response from a different BRG rep saying that the first rep did nothing wrong, but this rep also “noticed” that I used Trivago.ca (kind of implies the guy was looking on trivago.something-else). She tried it and now SHE could find the hotel no problem, however the Starwood rate was 327 so my claim was denied. I checked and yes, Starwood dropped rates (again) during a BRG stall. Beat the competition by 3 pounds. They left me locked in at 378 pounds though and didn’t bother adjusting me to the new flex rate of 354 haha. Nobody actually cares about the “best rate” part but they love to find ways to deny.

Now of course because the first guy couldn’t “find” the hotel on other websites (in spite of the links sent), more than 24 hours had passed since the original BRG, so they wouldn’t use the fact that they dropped their rates to validate the claim either.

They also said they were ignoring all the screenshots and PDFs because they can’t use “user supplied information.”

I wrote back saying this was hogwash essentially, that they were saying the guy did nothing wrong while at the same time noticing that they were using the wrong site for price comparison and they should validate the claim.

I got another letter back telling me they’ve done nothing wrong again yada yada but still nobody bothered to adjust the flex rate I was on. They were perfectly happy if I didn’t notice that I was paying more than the currently available rate.

So of course I cancelled everything, CC’ed a last letter to SPG Champion and said it was now food for bloggers.

I’m not looking for a resolution and I have no intention of staying at the hotel even if the produce the BRG now. This isn’t a case of me dealing with a rate change after the terms have expired, it is just them stalling and being unable to “find” things whatever that means (Trivago didn’t delete the hotel).

I had to link them originally to hotels.ca and those links have a way of expiring. I even put that in my original note and gave them the Trivago referral link that they “couldn’t find”.

It still works. What good are these guarantees when the chain just says “nuh uh we can’t see it” and then slams to door on you because 24 hours have expired?

Answer: awesome for marketing because they cost you nothing and the customer gets to think they have the best rate.

Most of the guarantees are not really to guarantee that the hotel chain has the lowest prices on their website but rather so that they can give an impression that they would be.

I have to say, however, that I have had most luck with the Starwood claims. They don’t sit on the claims for days (like Hilton), require the currency be the same on both sites (IHG), and they really only care about the rate and not about other terms.

There are still some issues with the guarantee. The India desk now handles some of the claims and their responses vary a lot.

Like the reader pointed out here, the first rep probably didn’t check the .ca site but something else. I had similar case the other month when OTA’s Android app had lower price but apparently the Apple one didn’t. Also, some sites may present different pricing depending of your operating system, browser used and geographical location determined by the IP address.

There should be way to escalate these claims to someone had a closer look. The reader had an Ambassador that couldn’t do anything. You would think that the Ambassador should and could have fixed this?

Hotels rarely have the lowest prices available on their branded websites. Room blocks are sold to third parties that distribute them to various travel agents and OTA’s.

Some Best Rate Guarantees are merely scams and authorities should take action against the hotels. I do think that, although not perfect, the SPG is one of the better ones when it comes to the BRG. It didn’t work on the reader’s case because the claim wasn’t properly processed in the first place.

SPG’s advertising about the benefits of the Ambassador program has very little to do with the reality as the reader’s case here proves. How the Ambassador is unable to act to have the issue resolved within the same company?

Reader Question: Why Hilton Cannot Show Outstanding Certificates With Expiry Dates Online & Why You Have To Call To Book?