British Airways and Virgin Atlantic never had the easiest relationship especially when it came to handling the competition in the media, with Richards Branson’s Virgin label usually coming out ahead. 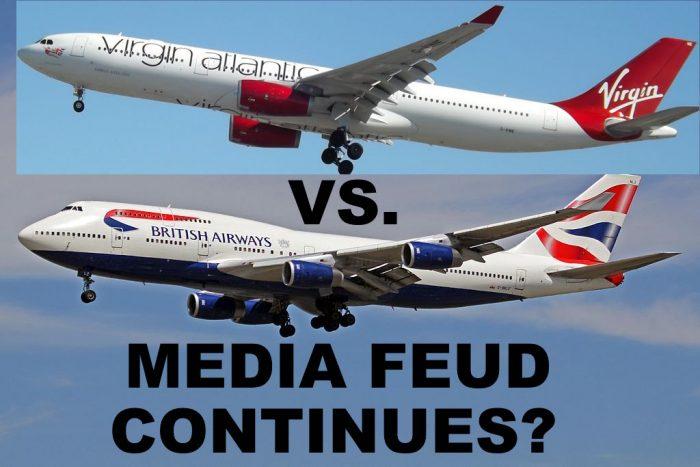 After it was rather quiet for some time in regards to big headlines of BA and Virgin going after each other, a current article of The Guardian suggests otherwise.

Richard Branson is known for cocky commercial stunts and making his mark in the media so when British Airways gained points this week for bringing the British Olympic Team home, another Virgin Label (Virgin Trains) put out a big media campaign to capture some headlines.  Rather than hitting directly at BA, Virgin went after a British politician who has claimed Virgin’s trains are overcrowded and he was unable to find a seat on Virgins service. They released CCTV showing him strolling past empty seats proved otherwise.

Spectators in the UK think the simultaneous release is no coincidence as can be read in The Guardian (access here).

On the September day in 1999 that the London Eye was due to be erected, the giant ferris wheel could not be lifted off the ground. Branson saw an opportunity to get one over on an old rival. British Airways owned a third of the London Eye and was going to be the title sponsor. … So, Branson scrambled an airship to fly over the site. It bore the slogan: “BA can’t get it up!!”

The stunt is a reminder of the public battle that has raged between Virgin and BA since Branson launch his airline Virgin Atlantic in 1984.

The companies were top of the news agenda again this week. On Tuesday, British Airways flew back Team GB from the Olympics in Rio de Janeiro. The VIP aircraft was named victoRIOus and was decorated with a gold nosecone and the slogan #greattobeBAck. Photos of the British Airways aircraft adorned the front pages of newspapers and websites.

On the same day, Virgin Trains released a statement and CCTV images disputing a claim from Jeremy Corbyn, the Labour leader, that a train he had been on from London to Newcastle was overcrowded and he had been unable to find a seat. Branson also tweeted out the statement and images.

If you were being cynical, you would point out that Virgin’s statement on Corbyn helped to divert attention away from BA flying Britain’s athletes back home. It took Virgin a week to respond to Corbyn’s comments. …

The rivalry really intensified in the early 1990s. The competition authorities ruled that BA was too dominant at Heathrow airport so handed Virgin Atlantic some of its prized slots as well as lucrative services to Tokyo. This opened the door for Branson’s airline to become an established long-haul carrier, with Virgin Atlantic moving its base from Gatwick to Heathrow as a result.

Lord King, the then boss of BA, was furious with these developments. He had overseen the privatisation of the airline and ensured that its dominance was protected. Now, however, he was having to deal with a new rival in Branson. King cancelled BA’s donations to the Conservative party in protest.

The BA boss was also irked when Britons stranded in the Gulf by Iraq’s invasion of Kuwait were airlifted to safety by Branson’s airline rather than the national flagcarrier.

In 2012, around the time of Virgin Atlantic’s deal with Delta, Willie Walsh, the boss of BA’s parent company, IAG, bet Branson a “knee in the groin” that in five years time Branson would not hold 51% of the airline.

“We’ve got used to BA hitting below the belt over the years, but I’m confident it would be the other way around on this occasion,” Branson replied.

So if the tycoon is still there in a year’s time, the rivalry between Virgin and BA could take another bizarre twist.

Media Relations and campaigns in the UK have always been a bit different and Virgin brands certainly had the edge with Branson at the helm always providing unique and fiery ideas.

Are these two events really related as the article suggests? I’m not sure what to make of it, but that the national flag carrier takes care of the Olympic Team is the norm and shouldn’t be countered in a demeaning way.

Nevertheless Virgin released their CCTV evidence against the politician at a time where it might have been able to carve a few decibels off the competitions trumpets, even though it takes a lot of creativity to span the bow between Virgin Atlantic and Virgin Trains.