There hasn’t been much good news out of Turkey as of late and, as a result, the national flag carrier is bleeding as well.

Bombings around Turkey and the most recent coup attempt have lead to fewer tourists and less traffic for Turkish Airlines. The airline posted a $647M USD loss for the first six months of the current fiscal year. On 2015 the airline posted $406M USD profit for the same period. 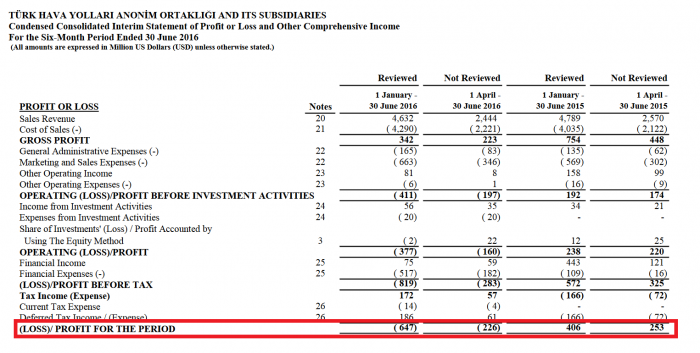 You can access the Turkish Airlines financial statements here.

Tourism has crashed due to the instability in Turkey and while the current leadership is busy cleansing the opposition members. I like the country (was there last time in May) and the airline. Just wish that the leadership would be more inclusive and democratic.

I doubt that there are any short term worries for the survival of the airline as the state owns 49% of it. Perhaps they may end some unprofitable routes and perhaps downgrade services to save some cash.

Airfare of the Day [Business Class] TURKISH AIRLINES Manila to Rome from $1,329