Korean Air has announced that it will soon charge passengers penalty fees when they no-show for their flights without canceling the ticket prior to departure. 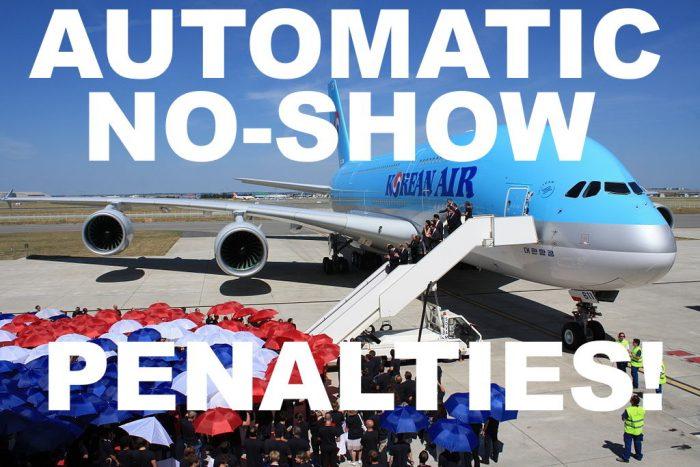 Apparently these fees will be charged automatically to the form of payment on file if the passenger doesn’t show, which includes mileage amounts for SkyPass bookings.

Nothing has been said about tickets which have been purchased through travel agents or in cash, in which case, no payment information is stored in the ticket. The same goes for mileage tickets issued by other carriers over which accounts Korean Air doesn’t have any authority.

Korean Air has confirmed that it will start charging passengers who fail to show up for their flight.

The move, which the airline said was being taken to “minimise seat wastage”, will apply to tickets purchased from 1 October 2016.  Passengers who either do not cancel their reservation or who fail to board their flight after check-in, will be fined.

Korean Air has been charging no-show fees on domestic flights since 2008, and its says the scheme has worked, encouraging customers to cancel their flights – rather than simply not showing up – and allowing the airline to re-sell the seats to other passengers.

If the no-showing passenger paid for their flight using frequent flyer miles, they will have 12,000, 7,000 or 5,000 miles deducted from their accounts for long-, medium- and short-haul flights respectively.

Imposing hefty change fees or even voiding a ticket entirely if a passenger fails to show on time are very common, but to automatically deduct a payment for failure to show is something out of the norm. That being said, if the passenger is allowed to retain the value of his ticket, this would be a different matter. Otherwise I don’t see a reason why Korean Air should have the right to sell the seat a second time when they already received payment once, irrespective if the customer actually flies or not.

I’d say that these cases are a rare occurrence in the way that one passenger makes it a habit to no-show on his flight. As mentioned, there are a few ways to avoid this fee… for example by paying cash, using a travel agent or simply canceling the credit card used for purchased.

I have (knock on wood) not missed a flight even once, but there were several close calls mostly due to traffic situations on the way to the airport. For the average person, I don’t think taking the measures I outlined are in no proper relation of effort/benefit to each other. If someone is really that concerned and hit by this new policy, it might be time to change the habit and actually show up at the airport on time.