Cathay Pacific & Dragonair are two of the airlines that engage in fuel hedging and it has caught up with them in a bad way as oil prices dropped dramatically and the airline is currently locked into higher rates. 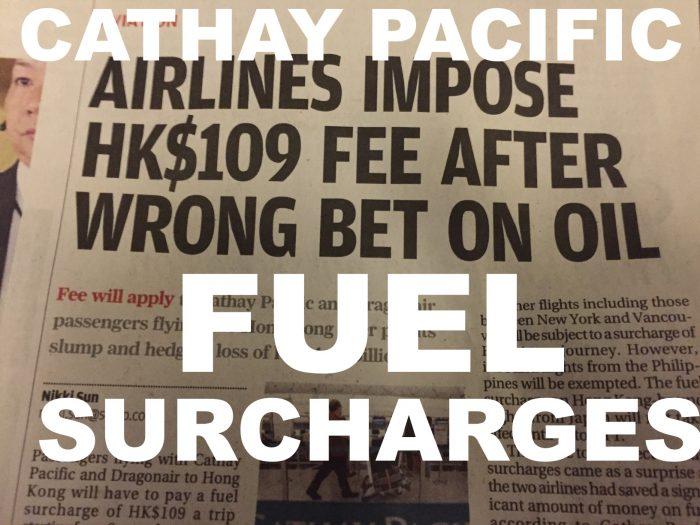 Now the carrier wants to correct their bad management and business decision by introducing a fuel surcharge on most flights not originating in Hong Kong and other areas where they are restricted by law.

Introducing fuel surcharges in times where oil is at the lowest in over a decade makes one wonder if Cathay Pacific management has lost its sanity. Even though (and maybe especially because) the surcharge is somewhat small I wonder why they don’t just chalk it up as a result of a bad decision and wait until more realistic prices set in for them. Times must be bad for the carrier!

Keep in mind they wouldn’t give you any money back to discount whatever ticket you have booked a year from now in case fuel prices drop either.

Cathay Pacific and Dragonair tickets issued or re-issued* for travel originating outside of Hong Kong on/after 15 September 2016 will have a fuel surcharge applied. The surcharge will apply per flight sector, including children and infant fares. No fuel surcharges apply for travel itineraries originating in Hong Kong.

The table below shows how the new charges will be applied:

Funny enough the airline doesn’t give any reason for this move but you don’t have to search far as I found a corresponding article on the front page of the South China Morning Post (see here).

Passengers flying with Cathay Pacific and Dragonair to Hong Kong will have to pay a fuel surcharge of HK$109 a trip starting from September 15 after a wrong-way bet on oil prices by their parent company, the airlines announced on Monday.

The move came after the company reported a worse than expected 82 per cent slump in first-half net profit as its passenger business was hurt by cuts in corporate travel and a HK$4.49 billion loss from placing wrong-way bets on fuel prices. The hedging tactic aimed at minimizing the unpredictable nature of fuel costs locked the carrier into higher prices.

“The decision to reintroduce the fuel surcharge overseas follows the practise currently adopted by other airlines in many of these markets,” the company said. “All itineraries originating from the city will not be affected.”

Cathay Pacific and Dragonair passengers were already hit in August with an airport departure surcharge at Chek Lap Kok ranging from HK$70 to HK$180.

The airport departure fee is a controversial ‘Airport Construction Fee’ that was introduced under the headline that it would be required to help the airport fund expansion which includes another runway and more terminal space.

But let’s face it, if there wasn’t a legal restriction on airlines to apply these surcharges ex Hong Kong and certain regions they would have done so in a heartbeat. In any case charging passengers these fees just demonstrates bad management on the expense of passengers in times of record low fuel prices.

Cathay had a rough time in 2016 with slumping corporate travel on top of their hedging-gone-wrong predicament and now imposes fees on passengers to make up for that.

Especially with Cathay’s competitors likely not being affected by the same hedging error and them being able to continue with the currently low fuel prices, it will provide further incentive to passengers to ‘book away from CX in favor of other carriers. Are a few bucks per sector worth all this negative press and bad impression? At least Cathay’s management must think so.