A LoyaltyLobby reader dropped me an email regarding a Spirit flight cancellation where the next available flight would have been three days later. 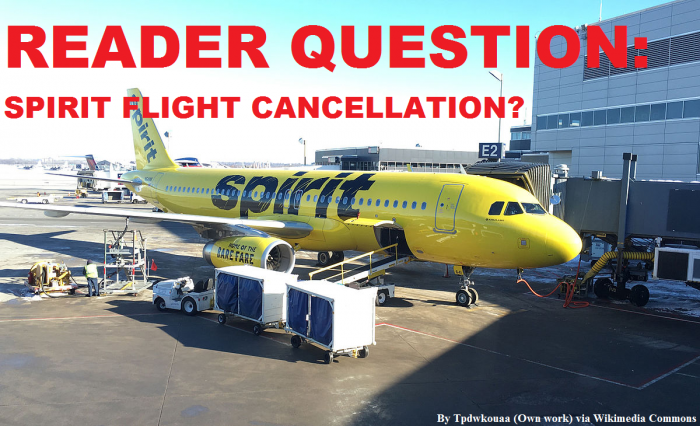 I read and learn a lot from your postings. Never in a million year will I think something like this will happen to myself.

Our family booked to fly on Spirit air from Orlando to Baltimore ( to drop off our grandson after Disney cruise) on Saturday July 30. Flight was scheduled for 2:15pm. We were notified of flight delay upon check in at airport .

Flight was delayed until 4:10pm,  but after all passengers boarded the plane, it departed from the jet way, sat on the ground until 6:45pm and came back to the terminal saying flight is cancelled due to bad weather in Balitimore

We stood in line just to find out there is no flight leaving for Baltimore and also, Spirit air does not have any other flight until Tuesday Aug 2

That means we will have to spend our own money to stay at hotel for 3 nites before we can get on a Spirit airline flight.

We were give refund for our 3 tickets  by the gate agent.

Checking with all other airlines, there are no other flights to Baltimore that nite.

We were supposed to drop off our grandson that saturday , and fly from Baltimore back to Seattle the next day. Even if we could book a flilght tne next morning to fly to Balitmore, we would have missed our filgh from Baltimore to Seattle. Last resort, we rented a car that nite and my husband drove 12 hours from Orlando to Balitmore to drop off our grandson, and my husband went to BWI airport right away to fly back to Seattle.

We filed a claim with Citi World Elite credit card which we used to purchased our airline ticket. We submitted car rental receipt , gas, toll and meals along the way totalling around $200. Our claim was dennied stating that delay has to be more than 24 hours . And they do not cover cxl by vender?  REALLY!!!! My flight was cxld . period. Had I stay in Orlando for 3 days at  a hotel waiting for the next flight, that would be covered???? That is playing with wording.

Is insurance company correct in what they say about 12 hours delay? Is cxl not worse than delay?

Any assistance or explanation will be greatly appreciated.

I hope that the Disney cruise itself went better than dealing with Spirit at the end of the trip.

You should always be careful when booking ultra low cost carriers such as Spirit. Most of their flights do operate as planned, but when there are issues, you are basically on your own. It is not uncommon for these airlines not to have daily flights between city pairs. They also cannot rebook you on other airlines that would get you to your destination.

I am not familiar with the insurance provided by the City World Elite card that you had used to pay for these flights. If the insurance doesn’t cover cancellation or if the delay must be more than 24 hours, it is pretty much useless.

You would need to take some time and read the insurance T&Cs of the credit card that you have.

I don’t believe that you will get anything from Spirit. I would check if the weather really was that bad in Baltimore that evening or if they just came up with some excuse.

You can save a lot of money by flying these ultra low cost carriers. But if something goes wrong as happened here, you must then be willing to open up your wallet and make alternate plans on the spot.

Any full service airline would have rebooked you on their alternate services or rerouted to other airlines (the latter may need to be requested often airlines don’t offer this without passenger asking).

If the insurance that comes with the City World Elite card really is this bad, you cannot rely on it. Unfortunately the reader found out the hard way.