Air Asia CEO Tony Fernandes apologized personally to a flight attendant of Thai Air Asia who felt compelled to prostrate herself in front of a complaining female passenger on a Bangkok bound flight. 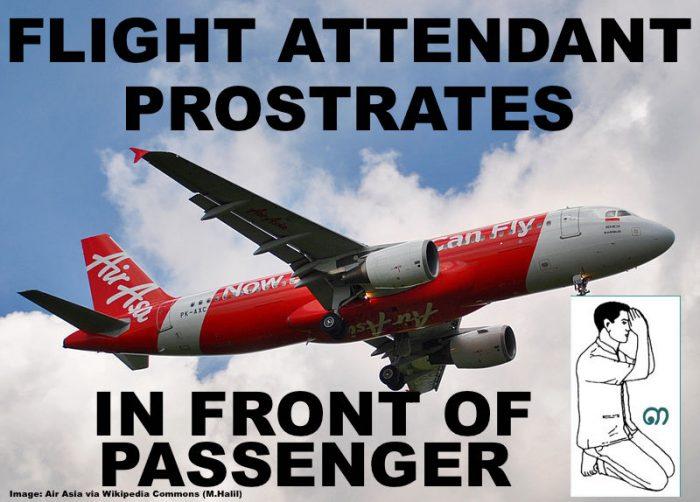 The passengers felt insulted after the flight attendant asked if her autistic daughter was ‘ok’ and if she could do anything to make her feel better.

The Thai Air Asia flight was said to be on route from Phuket to Bangkok when the scene took place on board and the irate mother went on with her tirade.

Mr Fernandes met Thai AirAsia staff in Bangkok on Thursday. He wrote in his Instagram account: “I met cabin crew and was good. Tomorrow I go to Hat Yai (of Songkhla province) to meet her parents. My fault. I’m the leader. We need better procedures on both sides.”

Both executives referred to the incident in which the flight attendant had to prostrate herself to settle down a mother who reportedly was upset with the attendant asking what she could do to help her daughter who reportedly had a disability.

It happened on a recent Phuket-Bangkok flight. The mother then sent a complaint to the airline as she felt the flight attendant was dishonouring her by asking what she could do to help.

The airline management later had a meeting with the mother and the flight attendant who prostrated before the passenger, Mr Tassapon said.

Mr Tassapon attributed the incident to poor communication between the airline and the passenger.

“We assure we will learn from these events and amend our policies accordingly and have our Customer Relations Department handle all passenger complaints in the future without the need for confrontation between passengers and cabin crew,” Mr Tassapon said.

Is Air Asia management out of their mind to even consider arranging a meeting between a complaining passenger and one of their crew? One would think that the staff has better things to do, plus the complaint sounds completely insane to begin with. I’m not the least bit surprised nonsense like this originates in Thailand.

Apparently in Thai culture, prostration is only done to a religious figure or a highly respected person such as one’s parents or senior relatives.

Due to the incompetence of the Thai management of Air Asia the groups CEO has to fly to Thailand to rectify the situation. In his typical straight forward attitude, Fernandes handled the matter in a sensitive manner.

Laughable in many regards as for one they don’t seem to realize how Skytrax works and in the light that Thais are some of the worlds biggest online trolls who in the past have swamped Facebook pages of NASA and Harvard University over controversial issues where they felt insulted.

Air Asia should have never accommodated the request of the mother to meet the flight attendant in person and allowing her to put pressure on the staff. This is mismanagement at it’s best. The correct way to handle any form of passenger complaint is through the customer relations department.

If the passengers feels whatever the airline offers as apology is inadequate then there is always the option of proceeding in civil court through a lawsuit if there is legal basis for that. In my opinion the complaint had absolutely no merit to begin with and should have been replied to in exactly that fashion.