A supply van which drove on the tarmac on Hong Kong International Airport caused an accident this week by driving straight into the engine of a moving Dragonair aircraft. 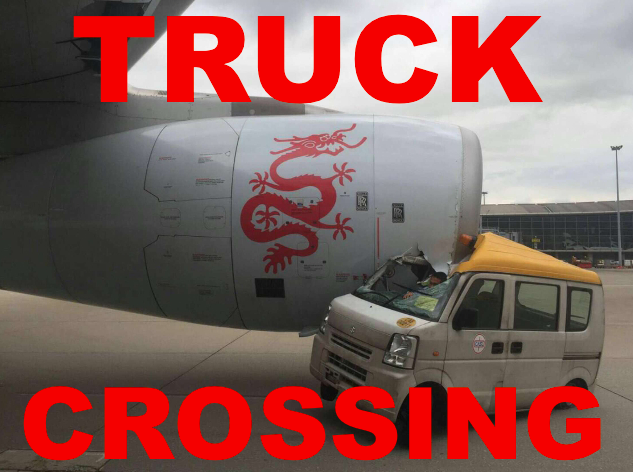 The flight was getting ready for it’s flight to Penang, Malaysia and had to be delayed after substantial damage to the engine until another plane was found to transport all passengers safely.

Maybe the driver fell asleep or some other circumstance lead to him going straight for the aircraft which, let’s face it, is something you don’t miss while driving around.

Shanghaiist (access here) had a short writeup about the incident today.

A Dragonair flight was preparing to takeoff from the Hong Kong airport for Penang, Malaysia, when it ran into a little problem — a van.

Surveillance video from yesterday shows a grey delivery van driving straight toward the taxiing passenger plane , taking a sharp turn right into one of its engines and being dragged along the tarmac.

The driver was lucky to have survived the crash. Photos from the accident show tha van’s roof crushed and the driver unconscious.

According to Apple Daily, the driver surnamed Cheng had worked overtime in recent months and his weariness may have led to the bizarre accident. He was later taken to the hospital with head and shoulder injuries and did not immediately speak to police.

No injuries were reported to the plane’s passengers or crew. Dragonair arranged for another aircraft to fly them to Malaysia while staff inspected the plane for damages. According to one witness, passengers were stuck inside the plane for about an hour after the crash.

There is a video on Youtube where the van and the damage it caused can be seen:

Really seems like he is going straight for it for whatever reason.

Thankfully there were no injuries on the part of  the passengers and crew on board the flight. The damage on both engine and car is substantial which likely comes at no surprise when you see the video above. I’d be interested what the police finds out about how the cause of the accident.