The urgently needed improvement projects at airports throughout the U.S. are creating a massive headache for travelers, employees and airport authorities, especially in Los Angeles and New York. 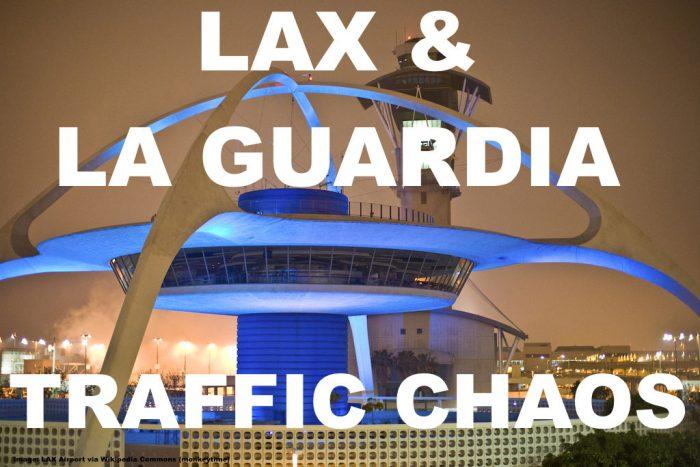 Passengers who frequent Los Angeles LAX or NY LaGuardia can confirm that the current road and terminal construction works create a hellish situation around the clock.

Airports are traditionally places that are buzzing with all sorts of activity. Passengers get dropped off/picked up by shuttles, taxis and private cars, delivery trucks, police and other traffic all have to move through the often narrow roads along the terminal areas. Add the urgently needed airport improvement projects and it’s a recipe for disaster.

As the Wall Street Journal (see here) reported yesterday that this combination transformed the traffic situation, especially at Los Angeles LAX and New York LaGuardia Airport, into a traffic nightmare.

Airports have experienced a huge construction boom as they’ve expanded and modernized. But the toughest jobs got saved for last: The most complicated projects in the most important U.S. airports are snarling travel for millions of passengers this year.

At Los Angeles International Airport, the already-congested single roadway that loops in front of all nine terminals has become traffic molasses. The number of cars jumped 9% this year, faster than passenger growth, according to LAX police. The horseshoe-shaped road has seen lanes closed for construction. Changes inside the newly expanded international terminal have created jams at the curb.

It will likely get worse before it gets better: A complete rebuilding with a people-mover to shuttle in passengers from remote parking and drop-offs is scheduled to break ground in 2018, with more disruption probable. The entire airport rebuilding is estimated at $14 billion. …

“Traffic is crazier than usual. It’s been a rough summer,” says Cheryl Berkman, chief executive of Music Express, a limousine service operating in several cities. At LAX, it’s taken some cars 45 minutes or more to loop 1.3 miles around the terminals. Parking limousines to pick up passengers is almost impossible because of construction in garages, she says. …

Rebuilding in limited space while still operating is the same challenge at La Guardia, an airport only one square mile in size. “If it was easy, it would have been done years ago,” says the Port Authority’s Mr. Smyth. He’s overseen terminal construction projects for Continental at Newark Liberty International and JetBlue at New York’s Kennedy International.

Traffic rerouting started Aug. 7 and hit gridlock on Aug. 22, when some people abandoned slow-moving cabs and buses to walk from Grand Central Parkway to the central terminal.

“It was complete mayhem,” says Jeremy Sherby, an energy consultant who sat for 45 minutes to get from the airport entrance to the terminal. The construction won’t prompt him to start using Newark or Kennedy for his frequent flights from Houston. But he now plans extra time on top of the extra time he’d already needed for La Guardia.

I’m not surprised about this article as I had a couple arrivals and departures at Los Angeles Airport last month, with 4 out of 5 times being stuck in the traffic loop for at least 30 minutes.

In the case of LAX, the design of the entire airport forces motorists to follow a horseshoe route with the exception of cars that are destined to Terminal 5/6/7 where it’s possible to take a shortcut between the parking garages. This option is not there for shuttles as they likely have passengers to be dropped off at various terminals. Even when I fly American out of Terminal 4 I sometimes ask the driver to take the shortcut and I walk the short distance backwards which is still much better than being stuck in traffic for 15-20 minutes.

Airports throughout the U.S. are in horrible shape and urgently need the described road and terminal improvements. The new Tom Bradley International Terminal at LAX is actually pretty nice with the rest of the terminals hopefully following suit at some time.

LaGuardia in New York is another desolate facility from another time and travelers as well as employees will have to deal with construction and the resulting consequences for a very long time. Unless a city can build a completely new airport and switch operations from one to another there is no other way of handling this. Better budget some extra time if you travel from either of these two destinations.