A reader notified us of his recent experience on Air Berlin as the airline has eliminated the complimentary beverage service on their short haul European flights.

All this comes while Air Berlin is promoting their new Business Class product with big slogans about premium passengers being able to choose items from their extensive on board menu.

It’s no secret that Air Berlin is once again in money troubles, but with this recent cutback they might turn off a lot of customers who shifted their business from Lufthansa to Air Berlin in the last few years.

We became aware of this after our reader Thomas sent us a message on Facebook last night.

Remember that you can always email us, send us a Facebook message or Tweet us about the issues, news and questions about hotels, airlines and other travel providers and we’ll feature these cases multiple times per week.

When AB announced their new European C, they mentioned that pax can choose from the extensive onboard menu. They apparently forgot to mention that for Y pax, the free drink service will be “enhanced away”, so drinks & snack will be per pay only.

I had two short AB domestic flights today and yesterday in Y and as per crew, the new concept started yesterday (18 Sep). So not even as an AB Platinum (which is oneworld Emerald) you get a free water but have to pay a whopping 3 EUR for a half liter bottle. They also already “enhanced away” the free meal for Platinums earlier this year (meals only served on flights of 90+ minutes anyways). Most pax were caught by surprise and needless to say not very pleased, so I think total sales were ~2 coffees per flight (full A320 + A321).

Buy on Board is nothing new and many airlines do this but paying for even the most basic drinks such as soda and water are antics of a low cost carrier. And paying for these beverages doesn’t come without troubles either:

Also payment (cash or credit card or German EC card) took like forever, so my guess is if only 1 pax per row had a drink, they’d be able to serve maybe 1/3 of the plane on a domestic flight (and half of the pax wouldn’t be able to finish the drink). Attached a few pictures of the menu.

Forcing people to pay for their orders will certainly end in a disaster just as Thorsten describes here. It’s impossible for the crew to serve an entire flight if everybody purchases a beverage and these transactions are processed by either credit card or cash.

What can you buy? Here are some beverage options!

4 EUR for spirits is a normal price as it’s being charged at many other outlets be it on planes, on the train or even a local kiosk. 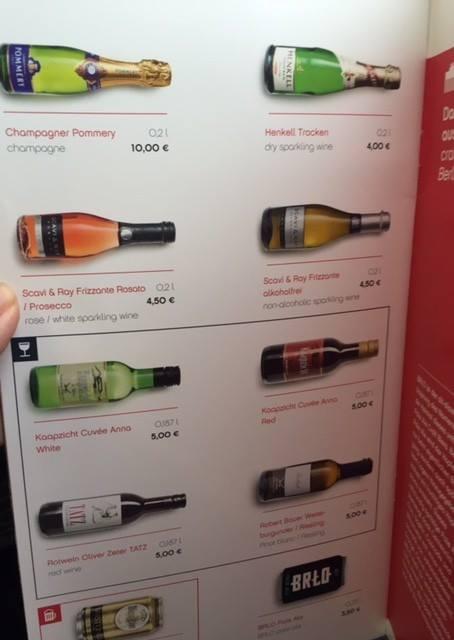 Prices for wine and beer are in line as well. Let’s not forget that Air Berlin has sold these alcoholic beverages for a long time and I think there is nothing wrong with that. Where I draw a line is when an airline that is part of an alliance such as oneWorld starts charging for basic Water, Coffee and Juice.

John wrote about about the carriers announcement to introduce a new Business Class intra EU/intra Germany back in August (see here).

I think Air Berlin is bleeding money and even Etihad isn’t able (or willing) to patch the financial wounds of the suffering carrier anymore. This new measure might just be a consequence of the desolate financial situation of the airline.

If this is the new way to handle on-board catering, just re-brand yourself as a low cost carrier and be transparent about your standards, Air Berlin!

I’m nobody who needs plenty of spirits or a couple bottles of wine on a 1 hour flight but I’d like to have a cup of mineral water or orange juice without having to pay for it (if I’m a lucky passenger in the first few rows who can be served before the plane goes into final approach.

In the long run it might cost Air Berlin much more than just a bit of catering when customers start to book Lufthansa again where (at least for now) on board beverages are served free of charge, included in the fare.