Starwood Preferred Guest has announced a new airline partner in Latin America, Avianca, which is based in Bogota and Lima and uses LifeMiles as its frequent flier program. 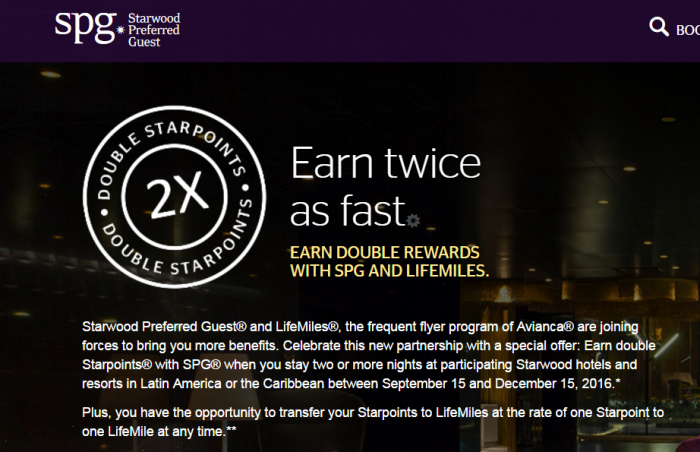 To celebrate this new partnership, SPG members can earn double Starpoints for their stays at participating hotels in Latin America between September 15 – December 15, 2016.

Note that the minimum stay length under this offer is two nights, and you can combine this with Starwood’s other promotions over the same period.

The wording of the email that Starwood sent out suggests that there could be a similar partnership brewing as is the case with Delta and Emirates.

Timing would be weird as the hotel company will be taken over by Marriott this coming Friday, although the SPG program is expected to be around until the end of 2017.

This is a separate offer from the overlapping global offer (read more here). You can earn under bonus points under both promotions as long as the properties are participating in both.

To participate in this offer, the LifeMiles® member must register online by December 15, 2016, and be a member of Starwood Preferred Guest®.

Offer is valid for stays booked and completed between September 15 and December 15, 2016.

A minimum stay of two nights is required.

Double Starpoints® per stay will be credited to the member’s account within 4–6 weeks following the close of the promotion. Only the member’s base Starpoints will be doubled. Additional bonuses earned, including but not limited to elite status points or online booking bonuses, will not be doubled.

Multiple rooms charged to the same member during the same stay will only count as one stay.

An eligible stay is defined as two or more consecutive nights paying a qualifying rate in the same hotel regardless of the number of check-ins or checkouts that occur and posting to the member’s Starwood Preferred Guest account.

A qualifying rate is any rate that is eligible to earn Starpoints in the Starwood Preferred Guest program.

To receive the bonus Starpoints for eligible stays, guest must be a member of Starwood Preferred Guest and present his or her SPG® membership number at the time of hotel check-in. Starpoints earned in the SPG program can then be transferred to valid LifeMiles accounts at the exchange rate of 1 Starpoint to 1 LifeMile. Once Starpoints have been transferred to LifeMiles, they cannot be returned to the Starwood Preferred Guest account.

All promotions are subject to the Starwood Preferred Guest program terms and conditions, which are subject to change without notice and can be found at spg.com.

Offer not applicable to groups.

Not to be combined with other offers or promotions and is subject to change.

Not responsible for omissions or typographical errors.

Void where prohibited by law.

Starwood reserves the right to discontinue this offer at any time.