Hawaiian Airlines, the rather small carrier from the Islands, is in negotiations with Airbus about the delivery of their new aircraft and is reportedly considering ordering models of the A380 as well. 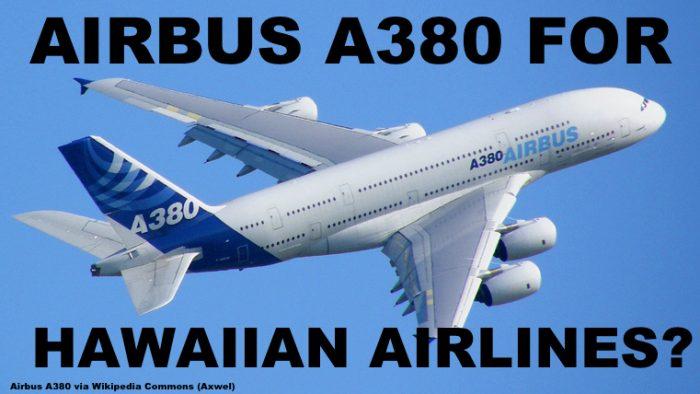 Management of the airline is evaluating if the Mega-Aircraft could play a role in their network of flights before deciding on orders which would need to be adjusted against standings orders of other models.
It’s interesting to see an airline considering the A380 at a time where more and more carriers are moving away from the big whale and focus more on single deck aircraft. Even the Boeing 747-800 isn’t as popular as expected and Boeing recently put the future of the iconic airliner to disposition.

You can find the Bloomberg article about the Hawaiian/Airbus deal here.

Hawaiian Airlines is waiting to see whether six A330neo jetliners ordered from Airbus will enable it to begin service to Europe. The U.S. carrier also is looking at adding more routes to China and the eastern U.S., and examining whether it should consider acquiring the A380 superjumbo, according to its chief executive officer.

Flights to London are a goal but may be at the limit of what’s attainable after the carrier swapped its order for Airbus Group SE A350-800 jets to the shorter-range A330neo in 2014, Hawaiian Holdings Inc. CEO Mark Dunkerley said in an interview Wednesday. …

The Honolulu-based carrier is studying about a half-dozen new long-distance routes to destinations in North America and East Asia, Dunkerley said at the Aviation Club in London. More East Coast destinations in addition to New York are a possibility, as well as cities in Canada. China, where the airline serves only Beijing, is “the really exciting prospect,” he said. …

It seems Hawaiian is first and foremost interested in international expansion especially into markets that have potentially good yield results such as Mainland China. Hawaii is a very popular destination for Chinese tourists and getting there is currently a little bit of a problem, at least it requires one connection. Air China is also eyeing an increase of capacity on that route.

Dunkerley, 52, said the airline is looking seriously at whether the Airbus A380 might have a role to play within its network, especially on routes such as those from Honolulu to Los Angeles, Tokyo and Las Vegas, which it serves with smaller wide-body planes six, three and two times daily respectively.

The argument for using the superjumbo, which might be available on attractive terms either from Airbus or, soon, in the second-hand market, isn’t conclusive and Hawaiian needs convincing of the business case, Dunkerley said.

This will be a big gamble. Once you have the aircraft you’re stuck with it and even big carriers such as Lufthansa and Singapore Airlines previously ran into issues filling the mega aircraft in the way they earlier anticipated. Other carriers such as Cathay Pacific weren’t interested at all after assessing the options. Many passengers prefer to have a choice of 2-3 different departure times rather than having only one option because the airline pools everything into one A380 flights that needs to be filled.

It will be interesting to see what happens with these Hawaiian Airlines orders and how their expansion plans are coming along. I flew them a couple times in the last few years and liked their flair on board as well as the service. More international flights would definitely be positive for Hawaii lovers.

World Of Hyatt Hawaiian Airlines Up To 5,000 Bonus HawaiianMiles Per Stay Through December 31, 2019