Monarch is a UK based discount airline that has been in business close to 50 years. Over the weekend, some speculation begin about the financial health of the airline. 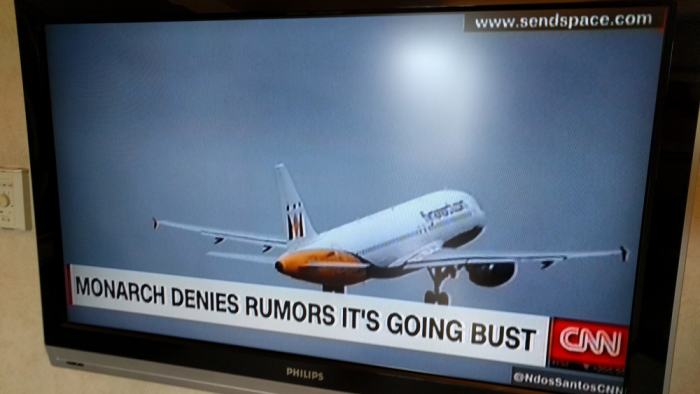 The airline was close to going under a couple of years back but was rescued by a private equity group. The airline states that it is expecting to have significant investment coming from stakeholders in the immediate future.

Here’s an excerpt from BBC (access the piece here):

Monarch said it was “trading well” despite a difficult period for the industry because of terrorist incidents, Brexit and the weak pound.

It added that a significant investment would be announced in the coming days. Over the weekend Monarch denied speculation that the company was going bust.

The BBC understands the company was in talks with the Civil Aviation Authority last night about its financial situation.

Here’s an excerpt from Guardian (access the piece here):

Monarch, among many other airlines, must renew its Air Travel Organiser’s Licence (Atol) by 1 October. An Atol – which requires an operator to show it has the financial resources to operate for three months – provides compensation to customers when travel companies go bust.

Monarch made no reference to its licence talks in its statement. It said it was expecting to make £40m – before taxes and other costs – by the end of its financial year in October. “This is despite a difficult period for the holiday industry due to terrorist incidents, Brexit and the resulting devaluation of sterling,” Monarch said.

Here’s an excerpt from Financial Times (access the piece here):

The company’s flights and holidays are operating as normal, carrying customers as scheduled.

“To weather tougher market conditions and to fund its ongoing growth, Monarch expects to announce a significant investment from its stakeholders in the coming days,” it said.

Thought that this was a good time to remind readers that it is always wise to pay using a credit card because that gives an extra protection in a case that business goes under. Many found that out when LowCostHolidays went under earlier this year and it was not covered by any of these voluntary plans.

The airline needs to find funding fast because it is difficult to imagine that people would be running to buy tickets under the current circumstances.

I may have flown with Monarch when they were a charter company in the 1990’s. I have certainly not taken any of their scheduled flights.