It’s Compensation Clinic Sunday again and this week a reader submitted us a case involving Thai Airways and a flight from Germany to Bangkok which ended up being cancelled that day. 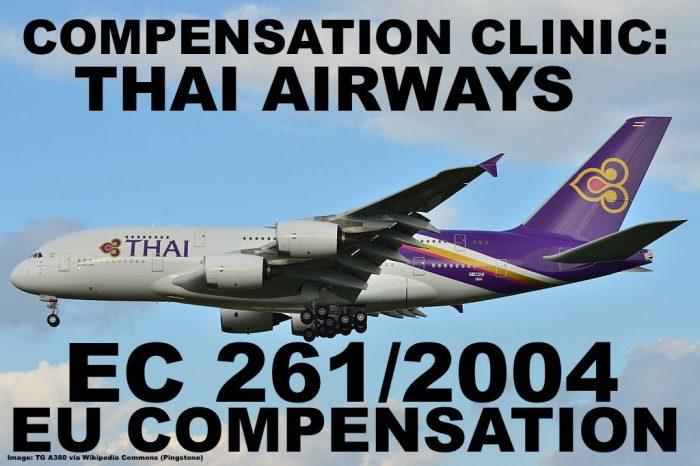 The aircraft had a technical malfunction and the flight was cancelled that night while passengers were accommodated at the Airport Sheraton (at least those in Business Class).

Thai is an airline that’s pretty alright when nothing goes wrong. Their prices are often ok and award tickets in First widely available (Business Class on TG isn’t really worth talking about), though this time the reader was on a paid ticket.

Here is the email we got:

Hello and best wishes from Germany! I am a long standing reader and would like to contribute to your compensation cases.

As discussed previously I was on Thai (TG) on the way to Bangkok when their aircraft had technical issues. I was informed early on upon check-in that the flight was moved to the following day (min 15h delay). Business Class passengers were told to go to the Airport Sheraton Hotel without being supplied proper hotel vouchers or other materials. EU passenger rights weren’t supplied to passengers either. I requested to be re-booked onto other airlines such as Qatar or Emirates but was told that wasn’t possible.

The hotel was very confused about neither of the passengers having any vouchers with them and it provided plenty of confusion on top of it all. I planned to spend only two nights in BKK and the company booked a pretty expensive Business Class full fare for more than 4000 EUR.

A week later I contacted Thai Airways the first time claiming my EU mandated Compensation per EC261 which is 600 EUR. Since I submitted my request to Thai Germany (Frankfurt Office) they got back to me requesting a german address as well as the original boarding card. Since I didn’t have this one anymore they first refused to help any further to which I replied with a letter in legal terminology that airlines do not have any rights to withhold EU Compensation if the passenger can’t provide flight specific documents.

They then requested from me a written statement under oath that the boarding pass wasn’t used in another claim with a different airline (what nonsense is this? who else would pay?). Enough is enough, I consulted a specialized attorney in Berlin who said Thai doesn’t have any rights to request these things and we’d win if we took them to court. I told them just that again via email.

In the meanwhile they sent an internal compensation form to our office in Thailand which they required all in return. These are straight forward and I completed them, attached my ID document and sent it back in. I write them a pro-forma confirmation in regards to the boarding pass. I would never make any statement under oath unless law enforcement or courts require me to.

Without further commentary Thai now wired me 600,00 EUR which is exactly what I was supposed to be getting if it wasn’t for Thai and their antics. If you ever have such a case, don’t give up and put pressure on them.

I still took your advise and complained about Thai Airways compensation process and treatment to the German Aviation Regulator ‘Luftfahrtbundesamt’ and already received a reply letter from them saying they will investigate.

Thanks for your help in the matter!

(Some personal information was removed from this letter based on readers request).

Here is the payment receipt he submitted to us:

When I initially got the first Facebook message from our reader I already smelled trouble. Thai is one of these airlines where you just hope that all goes right. If not you have a hell of a time finding support and someone of authority who is then willing to help you further. The only positive experience I ever had with Thai Airways offices is in Hong Kong.

I already told the reader he’d likely need to consult an attorney or the German Ombudsman the ‘Schlichtungsstelle fuer Oeffentlichen Personenverkehr’ (see here). Little did I know that Airlines have to sign up for, respectively can opt out of this Ombudsman office. Thai Airways apparently chose not to participate, a move some of the sketchiest airlines on the planet made as well.

I read the correspondence the reader received from Thai and can just say it was some pretty adventurous stuff they wrote, as if the law doesn’t apply to them.

It’s good that our reader got the matter finally resolved. Getting Thai Airways (or any Thai company) to actually compensate a customer is like pulling a tigers teeth. Even with totally legitimate claims.I can’t believe Thai actually had the gall to require a affidavit of sorts and to say that a compensation requires a German address which is absolutely not the case.

They tried every dirty trick in the book to weasel out of this but finally our reader prevailed. Airlines are required to produce the EU Passenger Rights in writing to affected passengers as well as a phone card or allowance to make arrangements resulting from the delay/cancellation. Thai failed here as well and I’m glad a complaint with the regulator was lodged.