A popular hotel and serviced apartment in Bangkok, the AETAS, will be partly demolished after a court decided that the owner disregarded special zoning laws for the location and built too high. 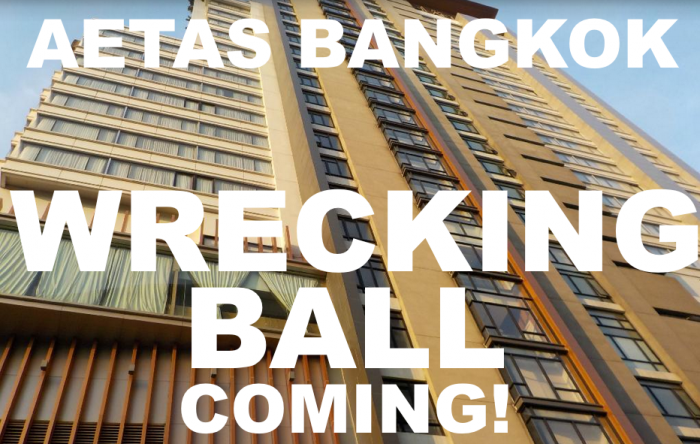 The case was pressed by neighboring residents who sought the execution of an earlier court decision that concluded the hotel exceeded the allowed height for roads under 10m with by up to 67% (16 floors).

It’s one of these cases that is rather obscure and you feel like some thing things don’t add up. Additionally you have a couple of prominent Thai Society people involved who were the ones pursuing the matter.

You can find more about this in the Bangkok Post (see here).

The Central Administrative Court on Friday repeated its order for the partial demolition of the 3-billion-baht Aetas Bangkok and Aetas Residence hotels on Soi Ruamrudee in Bangkok for breaching a height limit.

The court ordered the Bangkok Metropolitan Administration and the Pathumwan district office to reduce the number of floors of the 24-storey Aetas Bangkok and the 18-storey Aetas Residence to eight. The move is necessary to meet the 23-metre building height limit for a road that is less than 10 metres wide under the building control law. The two luxury properties have 423 rooms, and the Aetas Residence also has serviced apartments. …

Twenty-four residents on Soi Ruamrudee asked the court early last month to order the execution of the demolition order issued by the Supreme Administrative Court on Oct 30, 2014 for the partial demolition, as the hotels were continuing to offer services since their opening in 2010 despite the court ruling. The complainants included Royal Household doctor Songkram Sapcharoen and Grand Chamberlain Khwankeo Vajarodaya. …

It stated that the Supreme Administrative Court ruling was final and it was concluded during the trial that Soi Ruamrudee was less than 10 metres wide. Surveys found some sections of the road were slightly wider than nine metres. Local residents have opposed the construction since the development began in 2005. They lodged a complaint accusing former Pathumwan district chief Surakiat Limcharoen and former Bangkok governor Apirak Kosayodhin of negligence in approving the project.

Sounds like the typical Thai soap opera mixed with the worldwide sentiments of disgruntled residents. Those who know Bangkok won’t be surprised about this case though as building, land title or ownership disputes are nothing new there. The city houses multiple developments that were never completely finished or cleared for use after it became unclear who actually owns the place and if valid permits were obtained. Including the (in)famous Bangkok Ghost Tower.

There are two AETAS hotels in Bangkok. This particular one is the property at Ploenchit BTS not too far from the U.S. Embassy.

Too bad that a popular hotel is coming under the hammer or better the wrecking ball as a result of such incompetence. The concept and interior is really nice!

I liked the AETAS because it had a stylish and residential feel to it unlike most of the other Bangkok hotels. This sounds more like a few high powered people tried to get back at the owner of the property.

Quite a few people including LoyaltyLobby readers as well as personal friends stay at the AETAS based on emails and personal conversations. Those repeat guests and fans of the property might have to find themselves an alternative at least until the property has been resized. I wonder if a small 8 story hotel with the same service concept can generate enough profit to make the operation worthwhile though.

Hilton offered a very liberal match into its Gold and Diamond levels from competing programs for years and made some changes in August (read...

Indonesia Grants Automatic Visa Extension To All Visitors Who Entered The...