A few weeks ago, I wrote here about how I bought a Premium class ticket from Boston to London on Norwegian Air and saved about 20% off the cost by booking it on Norwegian’s home country site norwegian.no rather then the American version of the site norwegian.com.

I thought I would write a review of my trip so that Loyalty Lobby readers will know what to expect if they travel on this lesser known airline that has been expanding a lot recently, especially on transatlantic routes between the USA and Europe.

The flight I was on was scheduled to leave BOS at 9:20pm and arrive at LGW at 8:40am local time.  I arrived at the airport around 7:30pm (you cannot check in online as of yet for transatlantic flights and the website says checkin begins 2 hours before departure so don’t arrive too early).  There were about 15-20 people in the economy check-in line but they do have a premium lane and I was the only passenger waiting in that lane: 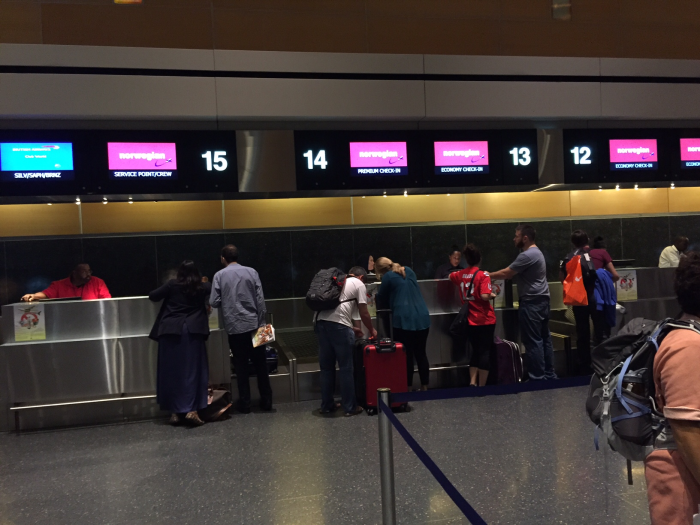 I was able to check in quickly and even though the website says that only a combined weight of 10kg can be brought on the plane as cabin baggage, I was able to carry on my ~14kg suitcase and ~9kg backpack with two laptop computers (I try to avoid checking bags whenever possible).  The boarding pass is stamped with the word “Premium” on it which allows you to get in the First/Business class expedited security lane.  Note that Premium class on Norwegian is basically Premium Economy, not business class, so definitely keep that in mind.

After clearing security, I made my way to the lounge to relax a bit before my flight.  Norwegian does not have a partnership with any lounges in Boston as they do at airports (i.e. JFK, LAX etc.) that allow access for their Premium class passengers, but if you have a Priority Pass membership (which comes with the AMEX Platinum, Citi Prestige and other premium credit cards), you can access the Air France lounge in Boston in the same terminal that Norwegian departs from:

The lounge is only marginally better than most US domestic airline lounges (AA, UA, DL) and has snacks, sandwiches, and a self-serve bar section.  They even have a Kosher food section as this lounge serves El Al passengers as well: 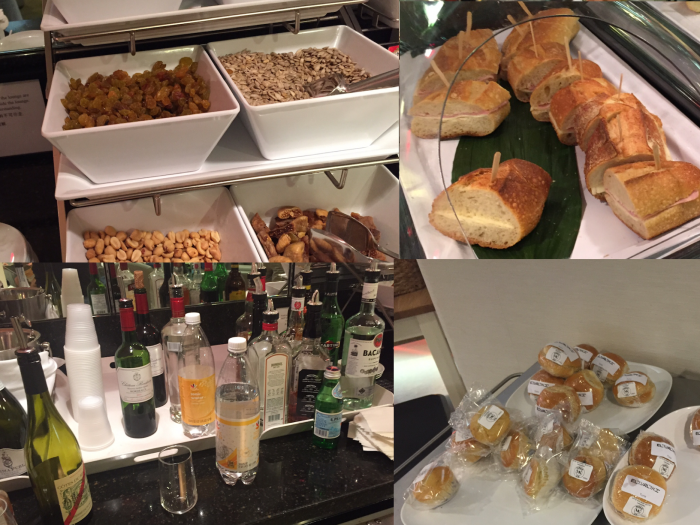 I was a little put off by the fact that the lounge of the national French airline didn’t even stock French champagne, but a relatively cheap brand of Italian Prosecco (retails for about $10 a bottle).  Also the two “premium” food options (sushi and a pasta dish) were empty when I got there and still empty when I checked a half hour later. 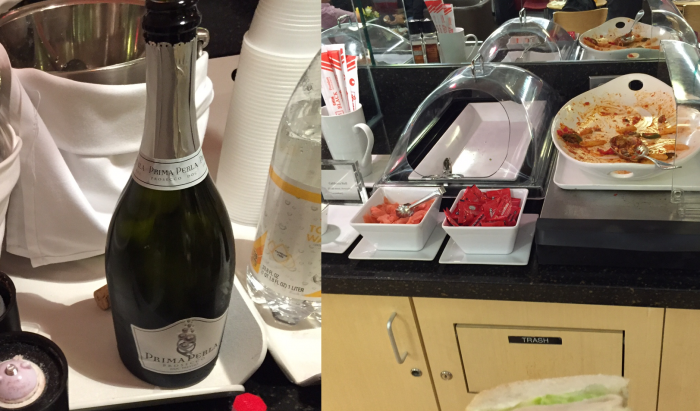 After a brief time in the lounge, it was time to board.  Premium passengers were allowed to board first and I settled into seat 5A in the last row of the premium section.  I was initially worried that this last row of the premium section didn’t recline fully, but found that it does indeed have full recline ability.  I meant to snap a picture of the seat fully reclined, but didn’t have a chance, so I’ll let this comfy looking Scandinavian guy from Norwegian’s site show you what the seat is like when it’s reclined:

I did manage to snap a pic showing the legroom between the seats and it’s definitely noticeably more than even domestic first class, which some other reviews compare the seats to.  The pitch (distance between one seat and the same point on the seat in front of it) in Premium class is 46 inches as opposed to 31 inches in Economy class.  For comparison, the pitch for most US domestic first class seats is about 36-40 inches.

The flight attendants were mostly young Brits, the majority of which were males with a couple of female attendants in the group as well. The Premium cabin has 32 seats and had about 25 or so occupied and the cabin was served by two attendants. They were friendly and responsive but didn’t go out of their way to proactively see if anyone needed any additional food or drink or anything.  This flight is operated by the Boeing 787 Dreamliner, which I’ve flown before and definitely prefer over other planes (larger electronically-dimmed windows, cabin mood lighting, high ceilings and ample bin space). 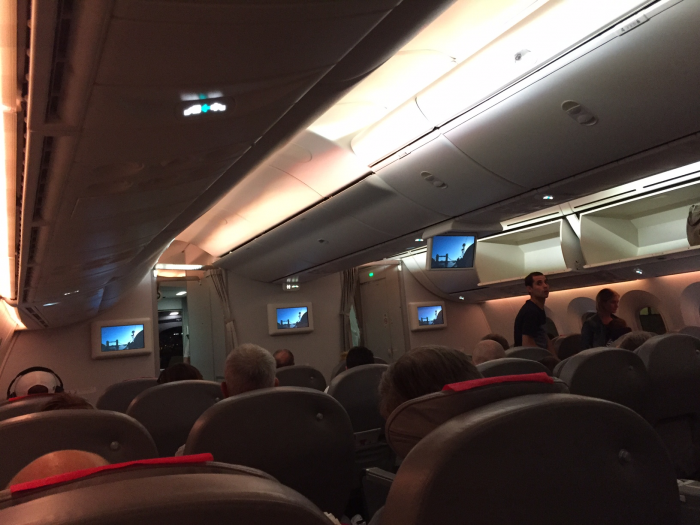 The touch-screen entertainment system pops out of the armrest of the seat and contains a decent selection of movies and TV shows.  You get a free pair of headphones in Premium class (economy passengers have to pay $3 for them) or you can bring your own (standard universal jack).  If you’re seated in Economy class you can also order snacks and drinks from the entertainment screen and pay at your seat as well.

Meal and drink orders were taken soon after we took off.  I think I may have consumed the world’s smallest Bloody Mary; the glasses were only a little bigger than a shot glass (the can is only 150ml/5 oz so you can see how the glass size compares)! 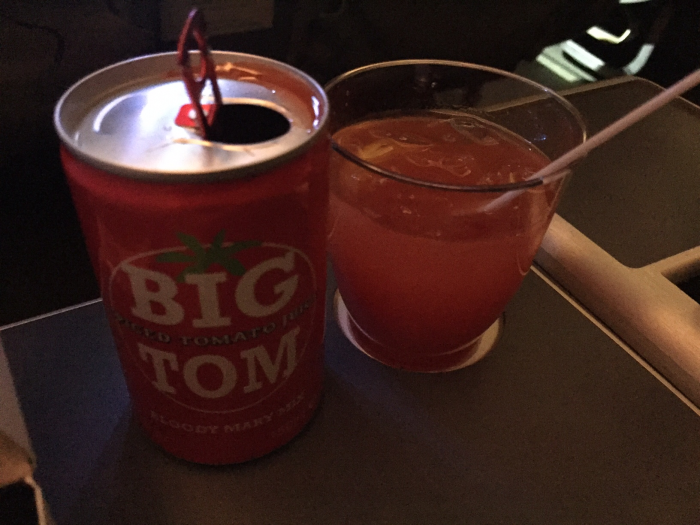 If I recall there were was a choice between a beef and fish meal; I chose the beef, which was served in a lovely cardboard box… accompanied by rice and what looked like bok choy and peppers, along with a cold couscous and mandarin orange side dish, and a chocolate cake for dessert.  Rolls were passed out after the dinner was served.

The food was edible, but not much more. The beef tasted like a minute steak that was cooked about 5 minutes too long, and the couscous dish didn’t have much of a flavor.  But I had already eaten a bit in the lounge so I wasn’t too hungry anyway.  Premium passengers also get free blankets (but no pillows!) which economy passengers can buy for $5 each.  The blankets are fairly comfy and thick, which was nice given the cabin temperature was fairly cold (maybe to prompt the economy passengers to buy more blankets?).

I didn’t get a chance to sample the breakfast as I wanted to sleep in a bit (and this is only a 5 1/2 hour flight to begin with, so I think breakfast service started less than 2 hours after dinner service ended), but I believe it was a bagel with cream cheese and smoked salmon on the side.

Overall, I thought I got decent value for my money flying Norwegian Air, especially with the 20% savings I got from booking my flight on the Norwegian version of their website. It definitely isn’t business class, but it’s pretty much on par with some of the better premium economy services out there (Virgin Atlantic comes to mind here); the meal could stand a bit of improvement but the seat and pitch can’t be beat in any other economy or premium economy service.  Considering that one can book a trip to London from the east coast of the US with pretty much no advance notice in Premium class for around $1000 USD roundtrip, I’d say it’s almost a steal, especially with regular economy fares on other airlines running around the same cost.