The Thai Government is on the spot after it became public news that it chartered a Boeing 747 for 20 Million Thai Baht ($575,000 USD) from Thai Airways to fly a delegation of 38 people including the Defense Minister to a security conference in Hawaii. 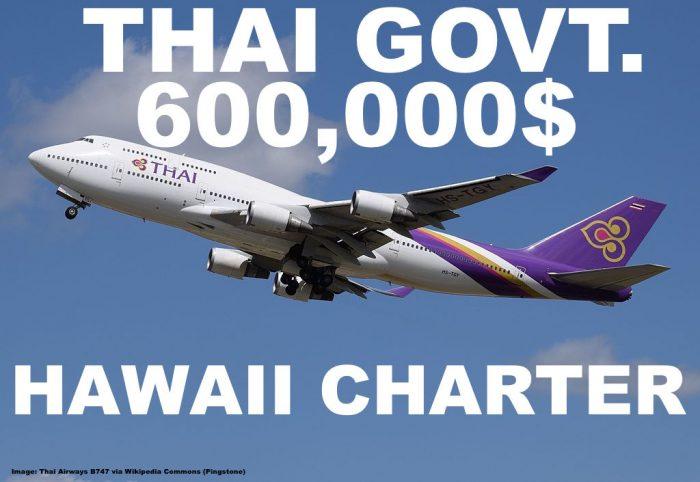 Based on news reports and an account of Thai Airways this figure includes catering expenses of 600,000 THB ($17,500 USD) which caused an uproar in Thai media calling the expenses overall excessive.

I found this case interesting because of multiple aspects including the amounts involved and also the response of Thai Airways to which we will come later.

The centerpiece of this discussion however is the question to what degree taxpayer money should be used to allow lavish overseas trips by political figures or dignitaries and if chartering a whole plane is a sensitive thing to do.

News reports includes those of Thai PBS Channel (access here) which I will use as reference in this matter.

Deputy Prime Minister and Defence Minister Prawit Wongsuwan defended on Monday that his delegation to Hawaii for Asean and US defence ministers’ meet during September 29-October 1 did not overspent as widely criticised.

He, however, admitted that delegation used a chartered flight of Thai Airways International for the trip to Hawaii and back because there is no direct flight to Hawaii from Bangkok and it will normally take several connected flights in order to arrive in Hawaii which is not convenient at all.

He said THAI offered the chartered flight at discount which was not as high as 20 million baht as reported in the social and mainstream media. Also, he added that using THAI’s service was helping the national flag carrier.

The deputy prime minister dismissed the report that the delegation spent about 600,000 baht for food costs alone as exaggerated, saying that he and the other members of the delegation ate ordinary in-flight Thai food such as noodles and were not feted with specially-cooked food.

This statement is a bit tricky because it doesn’t appear to be completely truthful based on simple facts in regards to the catering.

It’s highly unlikely that Thai Airways would serve noodles on a VIP charter flight. Even though it’s theoretically possible for a customer to customize the charter and catering in such a way it’s simply unrealistic that this happened. More than likely the airline makes suggestions based on their usual catering habits and given they used a 747 which includes 10 First Class seats as well as Business Class it’s expected that menu suggestions would be based on that.

What did Thai Airways say about this? They published a statement here.

Thai Airways International president Charamporn Jotikasthira clarified on Wednesday that the price quoted by the airline to the office of the prime minister’s secretary-general for chartered flight service for General Prawit Wongsuwan’s delegation to Hawaii was just an estimated price between government agencies and the actual price would be quoted by the airline once the trip was completed.

As for the on-board catering for the delegation, he disclosed that THAI proposed menus to the delegation to choose before the trip to Hawaii in line with the airline’s premium-grade service standard.

Food was arranged with flying times taken into consideration – 12.30 hours for the Bangkok-Hawaii flight and 12.45 hours for the return flight. There were altogether four main meals plus snacks throughout the journey and food reserves in case the flights did not go in accordance with plan, explained Mr Charamporn.

THAI chose wide-bodied Boeing 747-400 aircraft because the plane could fly across continents to destinations without the need of refueling mid-way, he said, adding that THAI has several of this type of planes and the deployment of one of them to serve the delegation did not affect the airline’s services.

He went on saying there were 38 passengers on the flight to Hawaii and 41 on the return flight.

I read another report where Thai Airways actually confirmed the 600,000 THB ($17,500 USD) figure for catering is correct but let’s break it down. Divided by 40 passengers and a return flight that’s $218 USD per passenger, per way.

This figure would include both food and beverage and doesn’t appear excessive to me. Keep in mind that the passengers don’t necessarily consume all the items but they obviously don’t want to run out of anything. Thai Airways usually serves Dom Perignon champagne in their First Class, though it’s not a given it was catered for this specific flight as well. It’s very likely that it was however.

The statement that the full cost of the trip is known and published after the trip is obscure and doesn’t compare to my few experiences with charters (4 in total) where the cost was known latest when signing the paperwork. Of course it can always be more expensive based on last minute customer requests.

Was it reasonable to charter this plane compared to flying commercial, scheduled flights?

It’s very hard availability wise to book a group of 38 people on the same flights. Even if a few (2-4) of them would be entitled to fly First Class (as the Deputy Prime Minister / Defense Minister and his closest aides likely are) that still leaves a good chunk of people who need availability.

Tickets would likely be booked in a flexible booking class, not some saver fare so you’re looking at about $8,000 USD per person round trip. Times 40 that is $320,000 USD. Give a little take a little that’s a bit more than half of what the cost for the charter was.

Government travel is always a bit complicated though. It’s not just about economics but also prestige, representation and safety vetting. It’s therefore understandable to facilitate charter options of the national carrier though to the general population it looks a bit opulent to fly with 40 passengers on an aircraft that is designed to carry 400.

For the reasons given above I can see why people feel the way they do about this charter but if you break down the cost it’s really not that unreasonable. Neither the decision to charter the aircraft nor the actual pricing of Thai Airways was out of this world.

On top of it all let’s not forget Thai Airways isn’t doing all that great at the moment and I’d consider it better if the Thai government pays them for a charter rather than giving $320,000 USD to a Korean carrier which would have been the likely alternative given Bangkok as the departure point.