Cathay Pacific‘s CEO has hinted in an interview that the Hong Kong based carrier will move towards a seating configuration of ten abreast, squeezing Economy Class passengers even more. 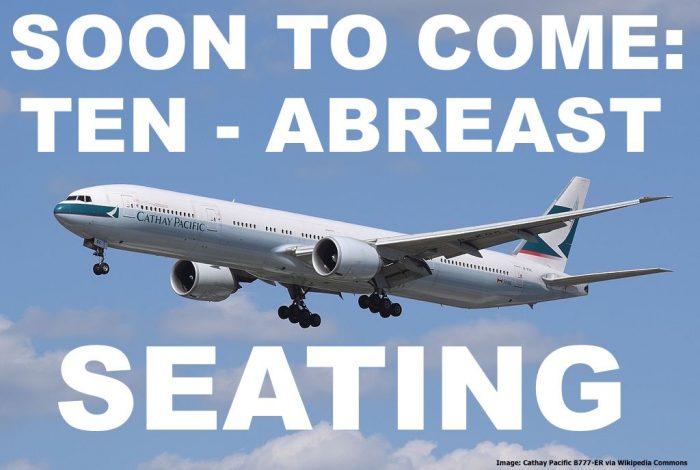 This change concerns the airlines Boeing wide body aircraft which would end up in a configuration of 3-4-3 seats resulting in ten passengers per row compared to the current nine.

With the retirement of the Boeing 747 last week which had a Jumbo-typical 3-4-3 configuration as well Cathay now relies exclusively on nine abreast (3-3-3).

In an interview with the South China Morning Post (access here) the Cathay CEO announced that this wouldn’t be a sustainable solution in the long term.

Cathay Pacific will move to the much disliked 10-abreast economy seating from the standard, spacious nine-abreast in plans revealed to the South China Morning Post by the airline’s chief executive.

The changes will be “bad” for passengers, says the airline’s cabin crew union under plans that will see an extra row of economy seats installed on its Boeing aircraft and the width of each seat reduced by up to 1.5 inches (3.8cm).

Chief executive Ivan Chu Kwok-leung said in an exclusive interview: “If you look at the Boeing 777s, which everybody uses from the Gulf to the US to European carriers and ourselves, the standard is 3-4-3. I think we are moving towards that stage, it’s very clear.” …

“Slots are very scarce,” Chu said. “We want to generate more seats per slot, that’s the key thing. That’s why we are doing it. It’s very important we do it.”

An additional row of seats could add up to 35 more economy seats on regional aircraft and at least 17 more on long-haul flights, adding nearly 1.1 million extra seats per year to the 70 Boeings in the Cathay fleet. The move amounts to 4 per cent more seats a year.

On the Hong Kong-Vancouver route, Cathay’s Boeing 777 can carry up to 275 passengers, but Air Canada fits 458 passengers into the same model.

Comparison all nice and well but I’m not a big fan of comparing apples to oranges. Keep in mind that Cathay Pacific also offers a First Class Cabin as well as Premium Economy on that Route that requires extra space.

Air Canada focuses way more on Economy Class than Cathay Pacific does and you see that when you have a look at the Seating Chart for AC’s Boeing 777.

Chu explained he wanted to offer the best in economy seats to ensure customers felt comfortable in the smaller seats. Cathay said it was committed to maintaining 32 inches of legroom as standard but the seat width would narrow – estimated to come down from 18.5 inches to around 17 inches per seat, based on changes made by rival airlines.

Cathay Pacific has not set out a clear timeline for the changes to economy class seating but it is understood to happen around 2018.

This boils down to personal preference. Do you prefer space to the front or to the side? I personally can’t stand close proximity to other travelers and therefore I prefer to have some more seat width rather than additional legroom.

Even though this particular change will not happen for another year or two I always recommend people to consult seating charts on the airlines website and to reserve seats in advance to avoid being trapped in a middle seat or in the very back of the plane.

Seating charts give you a better idea which areas to avoid (for example due to the proximity to nearby lavatories). Alternatively you can also consult websites like SeatGuru which offer individual indicators for seats that makes the choice even more discerning.

Cathay Pacific Shelves Half Of Their Entire Fleet, 75% Of March Flights Cancelled

Marriott Is Lastly Updating (Downgrading) Members Accounts Based On 2019 Activity:...

After several weeks of waiting Marriott appears to now be in the process of eventually updating those members accounts who qualified for a lower...

Marriott Furloughs Most Corporate Employees Worldwide For 60 To 90 Days

Cancelling Both Award & Revenue Flights With British Airways: A Mess...