It’s Fabulous Friday again and this week out topic is related to dining at the airport, specifically Pre-flight Dining at the First Class lounge.

Traveling mostly in Asia-Pacific right now there are a few facilities that immediately come to my mind where a la carte dining in a restaurant setting is made available at First Class lounges. Most of these are oneWorld lounges so accessible to all passengers who hold Emerald Status or ticketed First Class passengers.

The first is the Malaysia Airlines First Class Lounge at the satellite terminal in Kuala Lumpur (pictured above) where you can dine with a nice view to the tarmac. This restaurant is rather basic in food, beverage and also ambiance but let’s not forget that the only destination where Malaysia Airlines offers First Class is London Heathrow. The lounge is open all day so this restaurant is primarily used to cater to Enrich and oneWorld Emerald members flying Malaysia within the Region and their few long haul flights to AUS/NZ. I’m surprised that with all the cutback MAS did this restaurant is still operating.

A much better option though are the Qantas First Class Lounges in Sydney and Melbourne where John had a little breakfast just the other day: 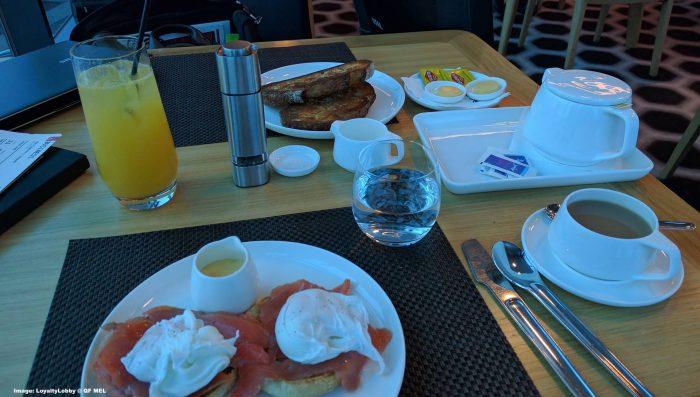 As the following shows, the menu is actually quite extensive:

There are also several options of premium champagne available for consumption including Veuve Cliqout and Perrier Jouet giving an extra notch to the Qantas Lounge.

While not an absolute requirement for a lounge it’s nice to have the option to dine in a civilized and calm manner instead of having the usual self serve buffet that often equals a battlefield at various lounges I visited before.

The practical benefit on the other hand is that especially late or very early departures often mean that the passenger is tired and would prefer to sleep rather than eat on the flight. So you can have a bit at the lounge and go to sleep as soon and the flight takes off.

Running such an a la carte restaurant comes with a certain cost associated but I think it’s worth it to have the feature available for airline lounges where the flight network features a plethora of First Class destinations as it upgrades the entire product noticeably.

For the Emerald frequent flyer who is traveling in Economy or Business Class on oneWorld Airlines such lounge features provide an astonishing value. I often fly regionally (flights up to 3 hours) on very cheap tickets in Economy Class and to have access to the F&B options and facilities of a real first class lounge often offsets the value of the ticket. Especially if you like to drink champagne (which I do).

Singapore Airlines has today issued an updated travel waiver policy due to the Covid-19 pandemic for those whose tickets were issued on or before...

The Last Holdout: What Is American Airlines Strategy In Withholding Elite...