The U.S. Department of Transportation has issued a notice that all Samsung Galaxy Note 7 cellphones are now banned from being transported on U.S. flights either as part of baggage or personal device. 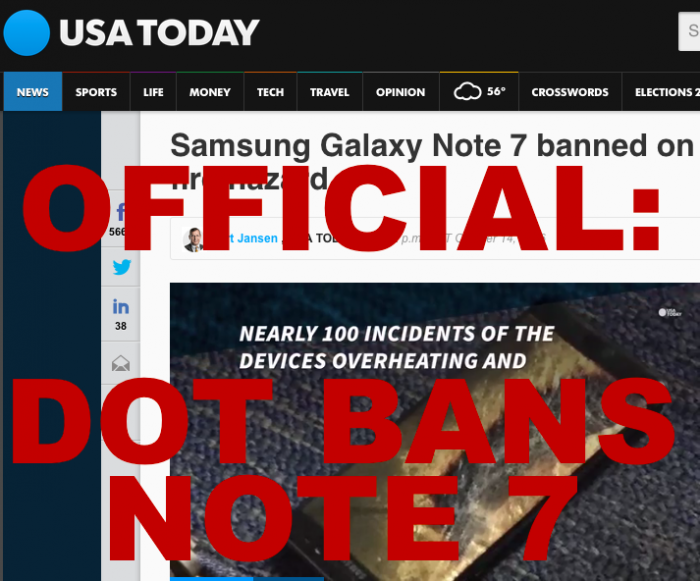 Simultaneously to this decision many international airlines including Qantas followed foot and also announced a total and complete ban of these devices on all their flights.

I guess it was just a matter of time and I have speculated about this step taken by the authorities in previous articles in the last weeks while reports of incidents were increasing.

The USA Today (see here) just had an article about it as well.

Samsung Galaxy Note 7 phones will be banned from all airline flights after nearly 100 incidents of the devices overheating and sometimes injuring owners, the Transportation Department announced Friday.

The Federal Aviation Administration previously urged travelers not to turn on the phones, pack them in checked luggage or charge them during a flight. The new ban is effective at noon Saturday, Transportation Secretary Anthony Foxx said.

“We recognize that banning these phones from airlines will inconvenience some passengers, but the safety of all those aboard an aircraft must take priority,” Foxx said. “We are taking this additional step because even one fire incident inflight poses a high risk of severe personal injury and puts many lives at risk.”

This is a bummer for those who planned to hold on to their Note 7 phones for whatever reason.

If you ask yourself how they want to police this restriction and if it has consequences if you’re caught with a Note 7 you might want to refer to the DOT brief (see here).

The U.S. Department of Transportation (DOT), with the Federal Aviation Administration (FAA) and the Pipeline and Hazardous Materials Safety Administration (PHMSA), today announced it is issuing an emergency order to ban all Samsung Galaxy Note7 smartphone devices from air transportation in the United States. Individuals who own or possess a Samsung Galaxy Note7 device may not transport the device on their person, in carry-on baggage, or in checked baggage on flights to, from, or within the United States. This prohibition includes all Samsung Galaxy Note7 devices. The phones also cannot be shipped as air cargo.  The ban will be effective on Saturday, October 15, 2016, at noon ET. …

The following is the entire brief for your review.

Tough words from the DOT aside, I think it’s highly unlikely there will be criminal charges in case a passenger is ‘caught’ with a Note 7 on a flight but there will certainly an altercation of some sort with various staff involved. My recommendation is to not let it come to this and get rid of this jinxed phone once and for all.

Meanwhile Qantas also had an announcement for their customers (see here).

Qantas and Jetstar customers are advised that the carriage of Samsung Galaxy Note 7 devices on-board is prohibited on ALL FLIGHTS effective 12:01am (AEDT) Sunday 16 October 2016. This is due to concerns regarding potential fire risk from the device’s battery after a number of incidents worldwide and follows a ban put in place by regulators overseas. The ban applies to devices being carried onto the aircraft, in carry-on baggage as well as check-in luggage. Other Samsung devices are not affected.

Note: this is updated advice from the previous Qantas Group policy, which allowed carriage of the Samsung Galaxy Note 7 provided it was turned off. This restriction has now been broadened to a total ban.

I expected this domino effect to happen and apparently Qantas was the first major international airline who pulled the trigger on it.

I guess this concludes the chapter Note 7 and the best option is really that the affected customer take up Samsung’s offer to get a refund for their device to select another cellphone model (it’s not like there is a shortage of them) instead of subjecting themselves to such trouble while traveling.

It’s likely that more international airlines will come out with their own bans citing the DOT decision as precedent even if their own aviation safety officials stay silent on the matter. I get their point and as an airline I simply wouldn’t want to take the risk either.