Sunday is Compensation Day and so it is that the Compensation Clinic makes a stop on the holiday island of Bali, Indonesia where yours truly had a pretty bad experience at the Le Meridien Jimbaran. 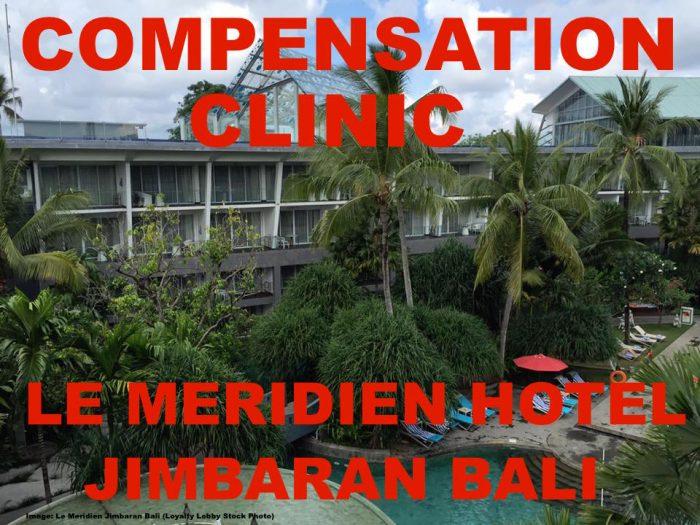 The property opened early 2013 and should have had ample opportunity to get the kinks evened out but apparently that proves to be difficult, especially with no General Manager on site.

Arriving at the Le Meridien Jimbaran gives you actually a very good impression. I really liked the hardware of the hotel. Rooms and facilities are nice in the known Le Meridien style and the staff is very friendly.

Unfortunately there are many things that aren’t comparing very well to the other SPG hotels in Bali. Internet was super weak on all three networks to the point of which it was impossible to load a website that was hosted outside Indonesia. I did a Speedtest and it showed 0.22 Mbps DL / 0.37 Mbps UP. Bad because even if i’m on vacation I have to dedicate 2-3 hours of my day to work.

It was impossible to get anything done with this internet connection. Not even emails would open and I tried using the network on the phone as well without any result. The technical staff tried to resolve it for two hours without success and I had to do something really urgent otherwise I’d just let it be.

In the end I even had to cancel on our driver going to Uluwatu that late afternoon because this was colliding entirely with my plans for that day. Obviously I had to pay the guy which was a complete waste of money.

After repeatedly asking for senior management and the General Manager a guy called me in the room 3 hours after my arrival and introduced himself as the ‘Hotel Manager’. Next day though he handed me a business card listing him as the Executive Assistant Manager of the Sheraton in Lombok. Checking with Starwood later that week I was informed there is currently no General Manager assigned to the Le Meridien Bali. A horrible decision if you ask me!

The room (Aqua Suite) has neither a hair dryer or an iron/ironing board. It is ‘on request’ only and things like these just baffle me. How can a 4* Hotel not have a hair dryer in the room?? It took us 10 minutes of frantic search until we called and got this info. By the time the device arrived the hair was dry and clammy again. Good start in the day.

After 3pm in the afternoon the seafood restaurants nearby start cooking and do so by burning coconut shells. The entire hotel is covered in smoke and you can’t even leave anything on the balcony or it’ll smell like a campfire. That pretty much goes for the pool area as well.

Breakfast must be the most boring I have seen at any Le Meridien yet. Uninspiring and generally not in line with what Le Meridien usually offers in the morning.

The stay was a complete bust apart from the nice dinner by the beach which was not part of the hotel. I raises the complaint points as above to SPG and requested a refund of the 7,000 Starpoints used as well as the 60 USD for the cancelled excursion due to the lengthy internet troubles. I also expressed my concerns about the hotel not having a General Manager assigned to oversee operations.

Here is their reply:

… The circumstances, which you describe, are certainly not acceptable for our standards. You may be assured the inconveniences encountered do not reflect the true level of service we strive to extend to our guests. Perhaps even more troublesome was to learn that the management of the hotel failed to respond to your concerns in a timely manner. If you agree, I would like to send you a cheque for the amount of $60.00 USD. If you could please reply to this email with a mailing address and full name to whom I can make a refund cheque payable.

Please be informed that the hotel has refunded your SPG account with 7000 Starpoints. Please allow 5-7 business days to see these in your online account. …

I ended up negotiating a credit of an additional 4,800 Starpoints in lieu of the $60.00 USD check because getting that deposited abroad would likely be a pain based on my previous experience.

Thankfully I only booked a single night at this property after staying in Nusa Dua before where the Laguna Luxury Collection was pretty great. We just wanted to see a different location so in the end decided to swing by Jimbaran for a night. I usually rarely use SPG points for hotel stays but in this case it made sense because the rates were more than 180 EUR plus tax for that night.

I think the refund of the points is a fair outcome and it was a nice gesture of Starwood to also offer a compensation for the monetary damage of the cancelled excursion which they obviously didn’t have to. In the aftermath John said he stayed there short after the hotel opened and also had internet issues there. A hotel should always have a General Manager assigned otherwise things get way out of hand and i believe guest complaints aren’t being heard and processed properly. Next time it’s back to the Laguna for me.