British Airways appears to have scaled back their catering for their intercontinental Club World Business Class product even more than previously announced.

BA reportedly had a series of cutbacks and experiments in terms of catering many which will start to come into effect January next year, but the current Club World product already seems to be affected.

Much to the dismay of flyers, British Airways experimented with scaling back catering on their shorter intercontinental flights such as London to JFK and vice versa, which also included downgrading the items available in the Club Kitchen and at time completely eliminating the relatively popular sandwiches.

Yesterday I had a BA flight from Bangkok to London in Club World and was shocked by the standards and disarray of the catering.

A choice of Thai Style Chicken Satay or Arabic Mezze

The Mezze sounded great and looked very presentable on the tray as well but BA doesn’t offer any corresponding Arabic or Pita Bread. Just the regular rolls which pretty much ruins the entire allure of the dish. I returned the appetizer with the respective comments.

I went for the Australian Beef as it was the only really appealing item on the menu and received a tiny tray with an even smaller piece of meat and a ridiculous potato gratin on the side, worth two small forks full. 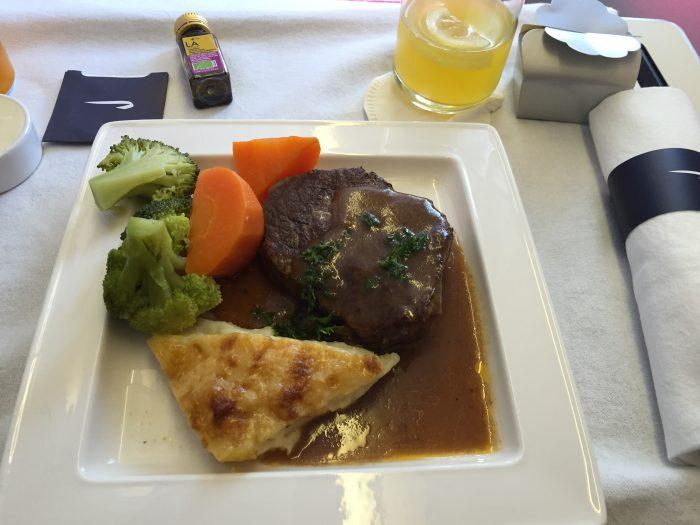 The meat was extremely thin and (maybe because of that or probably by accident) cooked very very well done. One could say you’d be able to kill someone with this brick. If you compare to the items on the tray especially the salt&pepper pouch you can get an idea of the dimensions.

Now to the Club Kitchen. This flight was scheduled with 12:40h duration and it’s reasonable that passengers like to snack in between. The menu outlines that crisps and sandwiches as well as other snacks await in the Club Kitchen. Fair enough… so I went with 6:30h to go and found this:

Chocolate, Nuts, Popcorn, Fruit and two leftover yoghurt (the last ones). I talked to the In-flight Service Manager and he was also ashamed of the catering and mentioned that many passengers complained.

The flight had 18 passengers in Business Class and they had exactly 18 sandwiched for the Club Kitchen. What could possibly go wrong?

There was a second meal service an hour prior to landing at Heathrow which included an appetizer and a main dish; both were appropriate and tasty.

I was impressed by the service of the crew and the ISM’s efforts to make passengers feel welcome on board, that was by far the best feature of the entire flight.

BA appears to go back to their old sarcastic translation of ‘Bloody Awful’ when it comes to this nickel and diming with their catering. Is Business Class really the place to start cutting costs, especially if there is no First Class on this route and the 777 aircraft has lived well past it’s best years? I don’t think so.

IATA CEO Wants Governments To Force Vouchers Instead Of Refunds

Thailand Extends Temporary Ban On All International Flights Until April 18,...