Chinese buyers seem to be very keen on expanding their portfolio to western run hotels and chains. Chinese insurer Anbang tried to purchase Starwood Hotels & Resorts but ended up losing to Marriott in a bidding war. 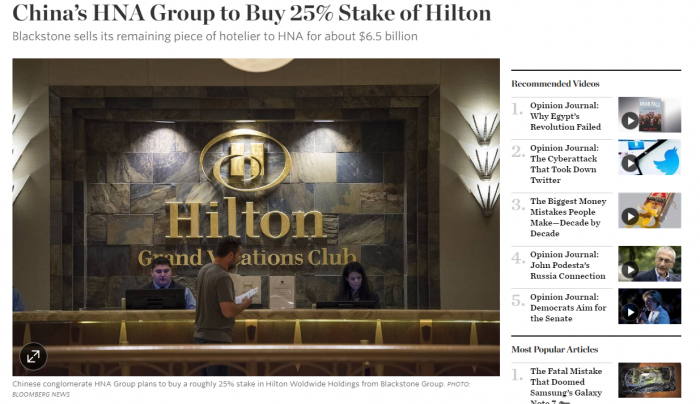 The Blackstone Group that took Hilton Hotels private and later brought it back to the stock market sold 25% of the company to a Chinese conglomerate called HNA. Blackstone still owns 21% of Hilton after this transaction is completed.

Here’s an excerpt from Financial Times

China’s HNA Group has extended its foray into the global leisure industry, this time with a deal to snap up a 25 per cent stake in Hilton Worldwide for $6.5bn

The company said in a statement on Monday that it was buying the stake in the US hotel chain from Blackstone for $26.25 a share — a 14.5 per cent premium to Hilton’s closing price on Friday.

The deal will reduce Blackstone’s interest in the business to 21 per cent.

It will be a long-term investment for HNA, now Hilton’s largest shareholder after Blackstone reduced its stake. The private-equity firm bought Hilton in 2007 for about $25 billion in debt and equity and has since tripled its initial investment, according to one person familiar with the situation.

And here’s from Bloomberg:

Chinese firms have been stepping up investments in hotels and travel businesses around the world as outbound tourism surges. HNA in April agreed to buy Minneapolis-based Carlson Hotels Inc. and its majority stake in Rezidor Hotel Group AB, owner of the Radisson brand. HNA last year purchased a minority stake in Red Lion Hotels Corp. HNA’s ambition is to sell the full range of travel services, including booking trips, hotel rooms and airline tickets.

HNA, which will become Hilton’s largest shareholder, can’t sell any of its stake in Hilton for two years and can’t increase its holding to more than 25 percent without Hilton’s consent, according to the statement. HNA also agreed to voting rights that would keep part of its stake aligned with other shareholders.

It is quite remarkable that this HNA that started as a regional airline back in 1993 has been able to grow to be a huge conglomerate that owns brands such as Swissport and Gategroup among others.

One can just wonder what might happen with Carlson that HNA purchased earlier this year and Hilton of which it will own a 25% stake? Could there be a combination of these businesses down the road?