A 33 year old British woman traveling to Dubai on British Airways had her trip interrupted by a Lifetime Ban which was levied upon her by the carrier after disruptive behavior on her outbound flight. 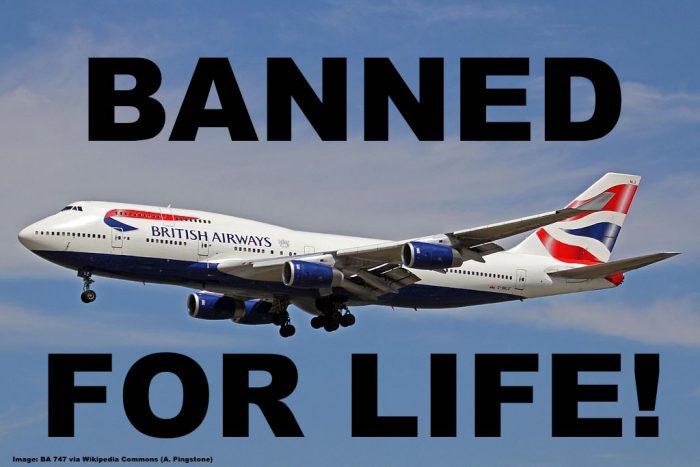 Allegedly the lady was intoxicated and aggressive towards the crew and other passengers during an hour long altercation before she was restrained and eventually handed over to authorities in Dubai.

There are many conflicting versions about what happened on board once she went into full rage mode, but when she tried to return to London, she learned that BA had cancelled her ticket and banned her for life from all British Airways flights.

You can find the story in The Daily Mail (access here).

Bridget Nhire, 33, was handcuffed and escorted off the flight after a man sitting behind her complained that she kept getting up from her seat.

She claimed the man in his 40s began arguing with her at 30,000ft on a Heathrow to Dubai flight – and was baffled as to why she was restrained.

However other passengers claimed she was drunk during the flight, hurled racist remarks at staff and passengers and tried to get into the pilot’s cockpit.

Ms Nhire, from Uxbridge, Middlesex, said: ‘I was treated like a terrorist. It was humiliating.

‘I was sat down and they put tight handcuffs on my wrists and strapped me to the chair. I had bruises for weeks.’

The fashion consultant added: ‘I only got up three times, but the guy behind me was complaining and asked me why I kept getting up.

‘I said I have a right to get up and walk around, but it escalated into a heated debate.

And this is where accounts of the situation start to vary and strongly differ from each other.

‘The crew asked me to move to the front and said I was being aggressive.’

She hit back at claims from the crew that she may have been drinking.

She said: ‘They thought I was drunk. I’d had two glasses of white wine with a chicken meal on the plane.

‘I was definitely not drunk.’

However a passenger on the plane, who wished to remain anonymous, told MailOnline: ‘She went to the toilet at least 20 times and had what looked like little bottles of alcohol in her hand.

‘She was screaming at people for about an hour and the staff went over to calm her down, at which point she started shouting “This is because I’m black. This is racist”.

‘She started shouting at a man a few seats behind her who was telling her to shut up and she was trying to reach across to him. She was really aggressive.’

‘Then she ran to the front of the plane to the cockpit and said “I’m going to talk to the pilot”, at which point the air stewards had to restrain her.

Neither of these stories sound very believable to be honest. Where is the passenger supposed to get the ‘bottles of alcohol’ from apart from small liquor minis which the crew will definitely not give out in large quantities?

At the same time this doesn’t sound as peaceful and one sided as the passenger wants to make people believe.

There was talk of doing an emergency landing in Iran which we were flying over at the time. I have the utmost respect for the staff for dealing with it so well.’

A second passenger, who also wished to remain anonymous, claimed: ‘When they strapped her in the seat she was shouting, “This is slavery! This is slavery!”‘

Ms Nhire was forced to sit, accompanied by a security guard, for 90 minutes until the plane landed.

That is of course absolute nonsense and I’m sure the British Foreign Office wouldn’t be very happy about BA dumping a British citizen in Iran with which diplomatic relations are rocky at best. The lady would have probably spend years in custody and be used for political games.
But what about this lifetime ban?

Ten days later Ms Nhire discovered British Airways had cancelled her seat and refused to let her on a plane to fly back home when she turned up for her return flight.

She was left stranded at Dubai International for eleven hours and called her mother to organize a different flight. She is demanding £350 compensation from the airline as a result.

Her mother said that BA needed to be held ‘accountable’ for leaving her daughter stranded.

Speaking from her mum’s semi-detached home in Ickenham, west London, Ms Nhire insisted that BA over-reacted and vowed never to use the airline again.

She said: ‘I can’t believe they didn’t tell me in advance that they had cancelled my flight. …

BA said it undertook a full investigation analysing statements from crew and passengers before taking the ‘rare’ decision to ban her.

If a customer has any future bookings with the airline at the time the ban is imposed, we will issue a refund. ‘As detailed in the letter issuing the ban, customers can appeal the decision.’

The second passenger on the flight told MailOnline: ‘She was waving her iPad around at the staff as they tried to restrain her screaming “I’m recording you”.

If British Airways indeed didn’t notify or attempt to notify the passenger by means of email or phone to let her know about this ban, they have to be held responsible in my opinion. It is perfectly alright to ban a disruptive passenger from your flights, but if this person has a return flight booked, the airline has to notify the passenger as soon as possible that alternate travel arrangements will be required.

While I’m usually not a friend of surveillance I think for instances like this it would be very useful to have actual CCTV footage to evaluate the situation better should a passenger be charged in court. I’m someone who doesn’t believe the crew is handling such situations very professionally at times, and they certainly lie or bend the truth many times to make their case more believable.

This lady wasn’t charged with anything once taken into custody in Dubai. The article doesn’t even mention an alcohol test which would be very interesting to see results of. She was kept at the police station for 5 hours and subsequently released and allowed to go on with her holiday or business trip. I have a hard time believing that if the claims made by BA were substantiated in such an extreme fashion the authorities would have let her go without any charges or without denying her entry into the UAE.