A British Airways A380 en route from San Francisco had to make an emergency landing in Vancouver, Canada due to several flight attendants falling ill short after take off. 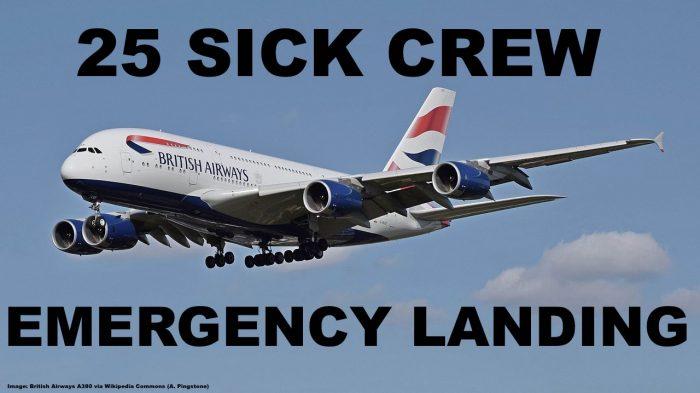 Twenty five crew members were taken to Vancouver hospitals where they received treatment, but shortly after all were discharged.

It goes without saying that the flight was canceled for the evening and passengers had to be accommodated at local hotels in Vancouver.

The Airbus A380-800 took off from San Francisco at 7:13 p.m. on Monday and was destined for London Heathrow Airport. But after crew members reported feeling ill, the flight was diverted to Calgary and then to Vancouver International Airport, where it landed shortly before midnight.

Hundreds of passengers had formed a queue at the Vancouver terminal on Tuesday morning to arrange flights home.

“I heard the announcement: ‘Senior cabin crew to the flight deck, immediately,’” said Robin Hunter, a retired police officer from Scotland who had been sitting near an exit on the plane’s upper deck.

“They came around and took everyone’s dinner away before they’d eaten it and said there was a technical problem.”

Taking people’s food away as a precaution is a good move but only makes sense if the crew had food from the same batch prior to the dinner service, which is highly unlikely given how busy it is between take off and dinner service. Usually the crew eats afterwards when it’s a bit calmer in the cabin.

Passengers were then told the plane would be diverted but were provided “very little information,” Hunter said. “Subsequently, they told us that several of the crew had become sick and that there was a ‘fume event.’ That’s how they put it.”

Seatbelt signs lit up and 20 minutes later passengers were told the plane was being diverted to Calgary because of “some flight attendants getting sick,” Delaine said. “We couldn’t see any smoke. The cabin pressure was fine.”

After 10 minutes they were informed Calgary couldn’t handle the plane’s unexpected arrival and would instead land in Vancouver, he said. Firefighters and paramedics boarded the plane soon after landing.

There were 400 passengers on the flight, British Airways spokeswoman Caroline Niven said in an emailed reply to questions. Asked about the report of a “fume event,” Niven said an investigation is underway and will look into reports of an odour onboard.

British Airways spokeswoman Michele Kropf said no passengers were taken to hospital and said initial media reports that the crew suffered smoke inhalation were incorrect. As a precaution, 25 members of the cabin crew were checked at local hospitals.

That’s almost a full flight given a BA A380 can carry up to 469 passengers. It didn’t last very long either, just 3:54h as the Flightaware map shows:

I’m surprised Calgary turned the jet away but that might be due to the plane being an A380 (not sure, just an assumption). Passengers also had to go through customs and immigration so that’s another consideration if there is actually CBSA staff available to process these passengers. given that it’s already midnight by the time they got off.

Thankfully none of the crew had a more serious condition given reports that all of them were discharged from the hospital several hours later.

When so many people are sick at the same time you can pretty much point to one common event and that should be food in this case, probably at the crew hotel. Not sure if thy pilots usually eat with the cabin crew or not. If it was something on board such as a ‘fume event’ then at least a few passengers would have been sick as well which wasn’t the case here.