Air Berlin has lost an important strategic partner as American Airlines announced the cancellation of their code share flights with the German carrier effective March 2017. 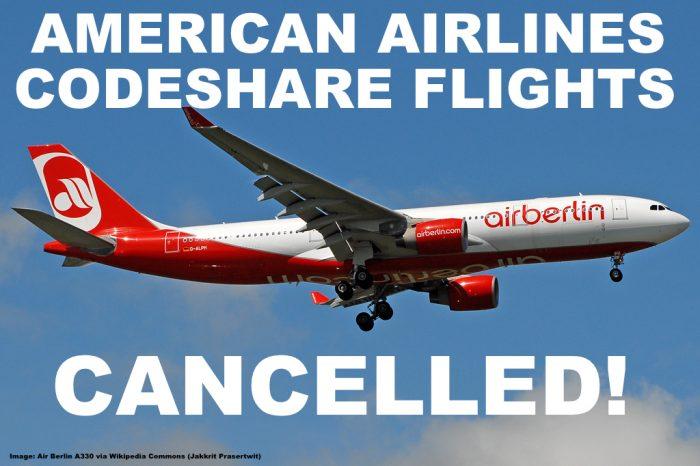 This comes as another blow for Air Berlin which is currently undergoing a restructuring due to their disastrous financial situation.

Air Berlin will shrink it’s fleet and route network dramatically to roughly a hundred flights from over 200 current connections through transfer of staff and aircraft to competitor Lufthansa. Air Berlin reportedly plans to focus on their long haul business but with the decision made by American Airlines this takes additional shine off Air Berlin tickets from Europe to the U.S.

American Airlines is canceling a codesharing agreement with its Oneworld partner Air Berlin, industry sources told Aviation Daily. The decision, which becomes effective at the end of March 2017, is deepening the already near-fatal crisis of Air Berlin by forcing it to fly a growing transatlantic operation without a U.S. partner. The move is understood to be linked to American’s fight against Gulf carriers (Air Berlin is 29.2% owned by Etihad Airways. …

This is certainly an inconvenience as it now takes extra effort to book flights beyond the initial U.S. gateway where Air Berlin flies to and the flights wont be under Air Berlin flight number anymore.

Now keep in mind it’s not a problem to add additional segments to a reservation, any travel agent or even online travel agency (OTA) such as Expedia does it routinely but this comes therein with loss of revenue for Air Berlin as well.

Airliners.de (see here) also reported that American offered to keep the code share agreement alive but under the condition that Air Berlin would distance their North America long haul routes from their relationship with Etihad, which I don’t deem to be possible given Air Berlin’s dependence on the ME3 carrier and majority shareholder.

To expect Air Berlin to cut off Etihad in certain ways in unrealistic in a time when the carrier is fighting for survival. I’m not even sure how important this code sharing with American really is, since I can’t see a tremendous amount of Air Berlin passengers booking additional connections beyond their U.S. gateways with the exception of probably Dallas.

In any way, this is definitely not positive for Air Berlin and might just as well be another nail in their coffin given other recent developments.

Freddo yesterday covered a rather attractive fare from Lufthansa that has been around for a while, however, previously with more restrictive stopover rules. Although Covid-19...

Should Airlines Ban Passengers Due To Criticism? Case: British Airways