AirAsia Moving To Main Terminal In Kuala Lumpur By January 1, 2017

When I was on a Malaysia Airlines flight from the newly opened Phuket International Airport yesterday (more on that tomorrow), I browsed through a Malaysian paper and found interesting news about AirAsia. 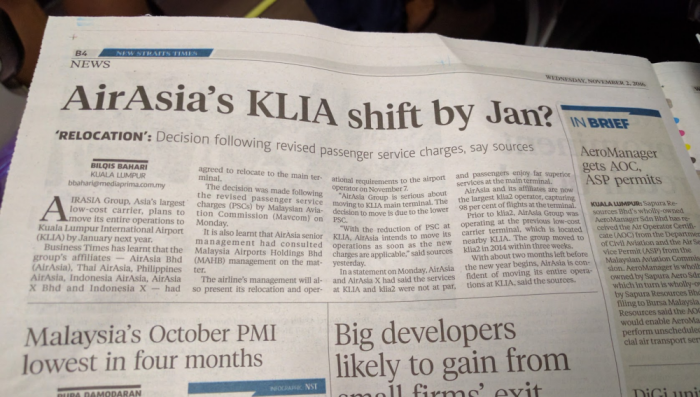 AirAsia and its various Asian affiliates that fly to Kuala Lumpur first used the budget terminal (really BUDGET) and moved to the separate KLIA2 terminal back in 2014 (probably haven’t been there). Now, the airline is supposedly moving to the main terminal used by Malaysian Airlines and all the other major carriers by January 1, 2017.

You can access The Star’s piece about this change here and Free Malaysia Today’s here.

Here’s an excerpt from the Star:

This is because the revised PSC will see a reduction by 46% to RM35 to Asean flights at the KL International Airport (KLIA) as opposed to an increase by 9% to RM35 at KLIA2. Asean routes make up about 40% of the total traffic at KLIA.

“From Jan 1, 2017, MAS’ Asean offerings will become cheaper and, by Jan 1, 2018, MAS will have fully closed the competitive gap with the low cost carrier at KLIA2.

And here’s excerpt from the Free Malaysia Today:

AirAsia’s move to KLIA will mean that some airlines based at the main terminal may have to shift to klia2, Business Times added.

“If the entire AirAsia Group moves to the main terminal, then some airlines would have to shift their operations to klia2,” people familiar with the matter told the news daily.

This should not pose any problems for the airlines as Malaysia Airports Holdings Bhd (MAHB) had earlier this year stated that klia2 was designed to cater to all types of airlines, although the terminal is mainly used by low-cost carriers at present.

It is difficult to see how this is going to work out. Are the various Air Asia X’s going to use the satellite terminal while the short-haul planes move to the regional one? This is how Malaysia Airlines handles the flights from these two.

I don’t believe that the connectivity to the city from the terminal that AirAsia has used is the same as from the main one. I doubt that any airline would willingly move there now that the passenger charges between terminals have been harmonized.

A friend of mine forwarded me an email from AirAsia that didn't make much sense because it was advertising flights...

Today AirAsia Japan has officially filed for bankruptcy after a half-surprise announcement early October that it would cancel all flights...

AirAsia Moving To Main Terminal In Kuala Lumpur By January 1, 2017