Passengers of an Aeromexico flight got into a real life version of ‘Snakes on a Plane’ after a Green Viper was found to literally hang out on their flight. 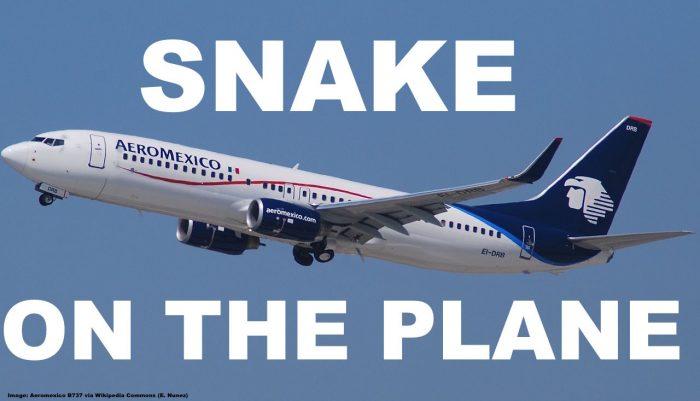 The snake was seen dangling from the overhead bin which resulted in the Mexico City bound passengers being scared from the sight of the rather large animal.

It’s still not clear how the snake actually got on the plane, if as part of a passenger baggage or if it slithered on board by itself hoping for a free ride.

RT News (see here) had a short write up and collection of photos featuring the snake.

Passengers on board an AeroMexico flight came face to face with a deadly five-foot long viper while traveling to Mexico City in what was previously only a movie scene, brought terrifyingly to life.

The snake made itself known to its fellow passengers by suddenly plunging out of an overhead locker during the two hour flight from Torreon in the northern state of Coahuila.

A video recorded by passenger Indalecio Medina shows the viper slithering above seats before suddenly dropping down and dangling overhead.

According to Mr. Medina the snake was “alive and kicking” when it arrived at Mexico City International Airport, Medina said, and was met by animal control authorities who secured the creature.

AeroMexico confirmed the potentially dangerous situation in a statement to Publimetro and is investigating how the snake came to be on the plane.

Here is the video taken by the passenger:

That’s a pretty big snake, I wouldn’t have liked to be a passenger seated close to this scene since having a venomous viper as your seatmate isn’t fun at all.

I wonder if the viper got on board during the ground time of the aircraft or if one of the passengers brought it on board either through checked baggage or carry on. Thankfully nobody was bitten, which could have easily happened especially if the snake was scared.